Surf Your Brains Out 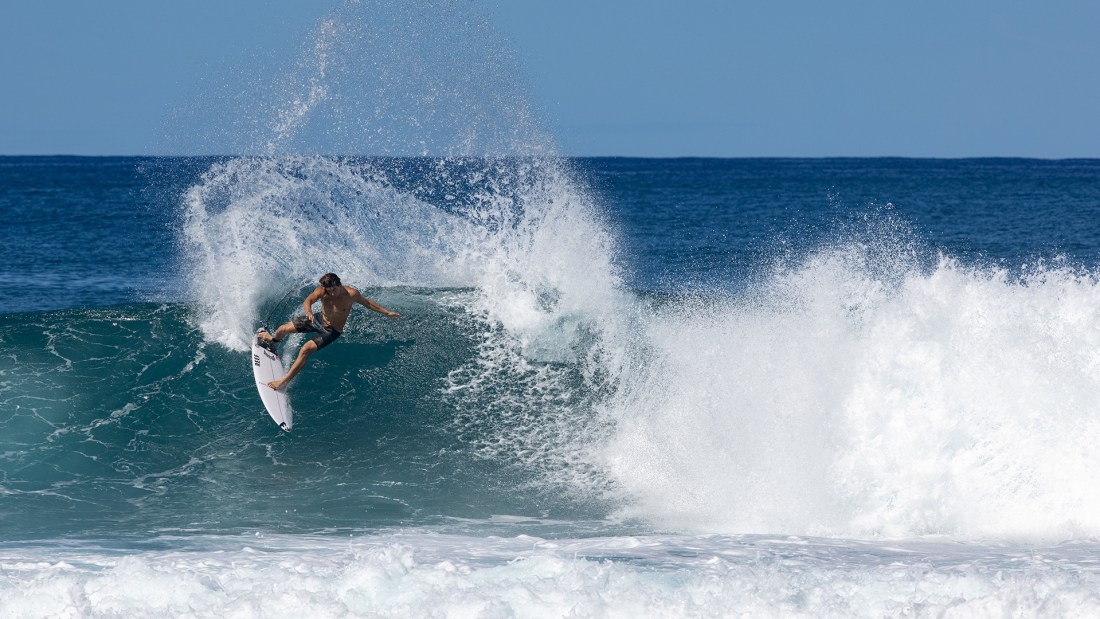 It’s a remarkable thing to witness top athletes go on a roll – when they seem virtually untouchable. Every motion, every choice, every maneuver seems pre-destined for success. San Clement’s Griffin Colapinto found himself in that zone this winter on the North Shore. In the relentless torrent of epic surf that pounded the coast this season, Colapinto was a standout in session after session. No stranger to blowing-up on the 7-mile miracle, Colapinto won the 2017 Vans Triple Crown at just 19 years old, becoming the first Californian to ever win the prestigious title. This season, he was the only surfer to truly challenge John John Florence’s career-defining performance, finishing runner-up in the digital version of the Triple Crown event. While a second Triple Crown title eluded him, if there was an award for most epic rides bagged in one season, Colapinto would be the undisputed champion. FreeSurf was able to sit him down for a few rare minutes on land between sessions.

What were your goals coming into this season?
One of them was to win the Pipe Masters, but that didn’t happen. When I come here, I always want to get better at barrel riding and just improve my surfing. I put a lot of time in the water, and I ended up having a really good season, especially at Backdoor. I got a bunch of good barrels that I was pretty happy about. I didn’t really have much in terms of expectations. But, I think that’s kind of the key.

Hale’iwa has probably seen more action this season than it has in years, describe what that was like?
Haleiwa has been really good this winter and there’s been a lot of good guys out there, so it’s been cool. Everyone’s super competitive, and this year it was especially fun with the Digital Triple Crown and everyone submitting their best clips. So, you could really tell who was surfing their best out there.

What was it like to be a part of some of those super sessions that went down out there this season?
It’s one of my favorite things to do – battling it out with your peers and trying to surf better. It’s just really fun, especially getting a good one in front of everyone.

What was one of the most impressive things you witnessed?
Probably John John, he got that crazy wave out at Hale’iwa while I was out there. It was his highest scoring wave that he submitted for the Triple Crown. He did a big carve, got really barreled, and then did a layback snap on the end. He did that first carve right in front of me, it was pretty rad to watch.

Hale’iwa is probably the one wave where video does it the least justice. Describe what’s really going on out there on those maxing out days?
You’ve got the sweeping current pulling you back, and you’re always fighting the current. When a set comes, you gotta make sure you’re not getting caught inside. If you do, you’re going to have to go all the way in and around, or get washed into the Harbor. And that really sucks. It’s a lot harder than it looks to get a good wave.

The waves on the North Shore are extremely difficult to master, throw in the locals, crowds, etc… At what point did you start to feel comfortable here?
I’d say when I was around 16 years old. Josh and Seth [Moniz] are my really good friends and I’d paddle out with them to most places. So, that made me feel a lot more comfortable.

You have a great relationship with the Moniz family, and a lot of friends here. How important was establishing those relationships?
The relationships I’ve made over here have been huge for me. When I come here now it feels like home, it feels like I’m back in San Clemente. I have so many good people to hang out with here and we just have fun.

Was there any advice about surfing here that you got along the way?
The best advice was to respect the locals and I’ve always been conscious of that and making sure that I don’t ruin their waves or anything like that. And, hopefully I can prove myself, then they’ll give me a little room to catch my waves too.

Does it ever trip you out to see other visiting pros who really stick to themselves here, and haven’t developed the type of relationships you have?
You can definitely see the difference in confidence with people that have the relationships here and people that don’t. Like paddling out at Pipeline for example. If you’re going out there and you have no one to talk to, no friends out there, you kind of feel like an outlier, and that’s gonna make it even harder to get a wave. But, if you’re talking with all the boys, and you’re friends with everyone, when you’re in the spot for a good one, they’re gonna let you go. Right Seth?

What were some of the challenges to surfing here when you were younger?
The biggest challenge for me was just always being nervous to burn one of the local guys and ruining their wave. So, I’d always be really scared about that. But now I feel I’m a lot better at knowing who’s going and who’s not going.

Your brother Crosby seemed to really come into his own this season, what has that been like to see him take it to the next level?
It’s been really cool seeing my brother surfing as well as he is this season. We went to Indonesia together at the end of summer and his surfing went to a whole nother level on that trip. He brought that progression straight over here to Hawaii. It’s really cool a lot of people are noticing.

Is it like deja vu seeing his evolution?
Yeah, it’s full dejavu. I feel our progression has been really similar. Except for Crosby, he was a late bloomer. When he was like 14 years old, he wasn’t very good, yet. Since then, he’s gotten really good from the time he was 16 years old, and on. We’ve become really competitive since. I used to give him a bunch of tips, but now I don’t really do that anymore because he’s so good. There’s actually not many tips I can give them. It’s more of a rivalry now.
It’s competitive, but we have a lot of love and support for each other.