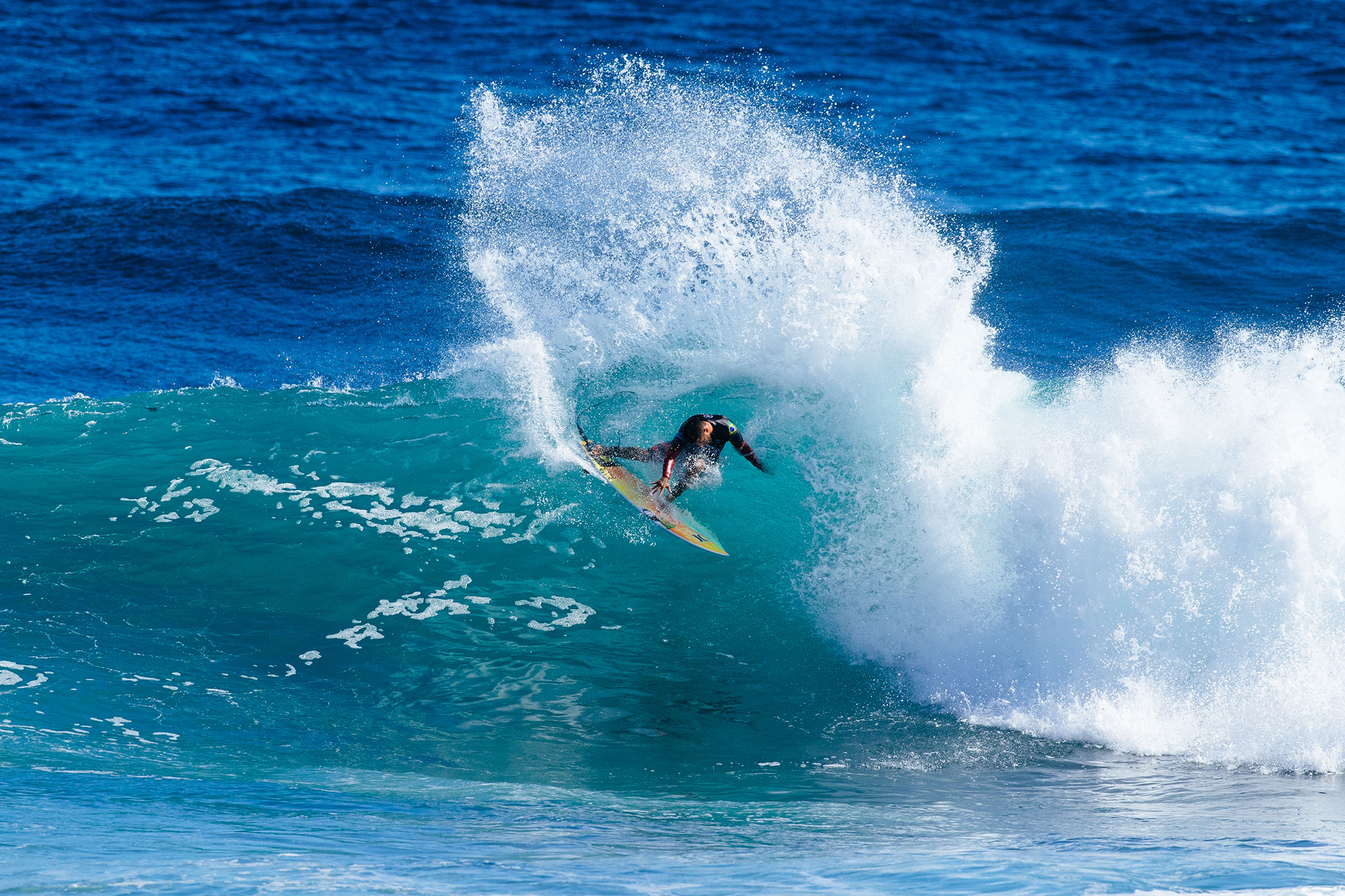 Yesterday, in absolutely prime conditions, Tatiana Weston-Webb and Filipe Toledo stole the Margaret River Pro show and claimed victories at Main Break for the first time in both of their careers.

After John John Florence’s announcement over the weekend that he would be pulling out of the rest of the event due to injury, it was anyone’s game on the men’s side of the draw going into finals day. Jordy Smith gave Filipe a run for his money, but it was the lightfooted Brazilian and his lighting-fast carves that ultimately sealed the deal.

Tatiana Weston-Webb had to power her way past event fav Steph Gilmore in order to clinch the women’s title. And power she did. Although Steph was able to lay down some of the most memorable rides throughout the entire event, when it came down to the wire, Tatiana outperformed the 7x World Champ for the top spot on the podium and the No. 2 spot on the rankings.

Both wins were dedicated to Bronte Macaulay and her family, who tragically lost Bronte’s brother and local charger Jack over the weekend.

Hit play above to rewatch the event’s final heat and continue reading for the WSL’s recap of the day:

Tatiana Weston-Webb (BRA) has earned the second CT event win of her career after besting seven-time WSL Champion Stephanie Gilmore (AUS) in the Final. The 25-year old posted an excellent 16.23 two-wave score (out of a possible 20) to Gilmore’s 15.00 for the win at Main Break in Margaret River.

“I can’t explain how incredible this feels,” Weston-Webb said. “Steph is one of the best surfers of all time and was always someone I looked up to so much, so it was incredible to come up against her in a Final. You don’t often get to surf against a seven-time WSL Champion so this feels amazing. I’m just thankful I took a win after a second-place finish at the last event.”

“I want to say that this win is for the Macaulay family,” continued Weston-Webb. “I came up against Bronte earlier today and seeing her show up for her heat was so brave. I can’t imagine what she has been going through. They are an amazing family with so much love and are such a big part of surfing here in the West and my condolences are with them.”

Following today’s win, Weston-Webb has secured the best start to a CT season and now jumps to World No. 2 on the leaderboard. With the new Rip Curl WSL Finals format, Weston-Webb has put herself in a strong position to lock herself into the Final 5 for a chance to win the 2021 World Title.

Filipe Toledo (BRA) was in searing form on Finals Day, building momentum through each heat he surfed and saving his best performance for last, posting a two-wave combination of 17.33 (out of a possible 20), one of the highest of the event and the 76th excellent heat total of his career. Toledo’s trademark frontside power-hacks seemed to match the Main Break grunt pound-for-pound as the exciting natural-footer gouged and sliced his way to victory with the equal second-highest total of the entire event.

This result sees Toledo rocket from 8th to 3rd on the rankings as he eyes a spot at the WSL Rip Curl Finals later this year.

“This has been a really fun week,” Toledo said. “There have been such amazing waves and amazing surfing from everybody so to come out on top feels so good. This one is for my son Koa, it’s his birthday today and he asked me to win the trophy. I promised him I would and I could not break the promise, so this one’s for you son, I love you. This win will be a huge jump on the rankings for me which I needed. This Tour is all about consistency and if you’re not showing up in the Finals often, you won’t make that Final 5, and that’s my biggest goal for the year, to give myself that chance.”

Jordy Smith (ZAF) snuck his way into the Finals at Margaret River with a number of narrow margins separating him from his opponents. It wasn’t until his Semifinal that he showed everyone that he was a solid chance at taking victory at Main Break, a wave that has always suited his style of surfing. In the Final, Smith was unable to find an answer back to Toledo’s massive scores but the South African was still stoked to find himself back in the mix on Finals Day for the first time on the 2021 Australian leg.

“What a week,” Smith said. “I always enjoy coming to West Aus and it’s because it offers up waves like we’ve had here for this entire contest. I had a good time today and was stoked to make it into a Final for the first time in who knows how long. Next, I just need to win one of these things. I’m just excited to try and keep some momentum and head over to Rottnest Island and hopefully go one better over there.”

Seven-time WSL Champion Stephanie Gilmore (AUS) earned her best result of the season and her highest placing in Margaret River with a runner-up finish today at Main Break. In her 47th Final appearance, Gilmore was looking to clinch her 32nd CT victory, but it wasn’t to be as Weston-Webb pulled out one of her bigger performances to overcome Gilmore. Gilmore will now head to the Rip Curl Rottnest Search sitting in third place on the world rankings as she looks for her first victory since 2019.

“At the start I let Tatiana take that good one when I had priority and she got an 8.50,” Gilmore said. “That threw me off from the start, but I did keep positive that I could do it. I know I can get a 9.50 at this spot, but Tatiana is such a tough competitor and amazing surfer so I’m really just stoked to have made the Final out here. This is not a strong location for me, so I’m just stoked to have made the Final here for the first time. Tatiana is such an amazing competitor and her backhand is so strong especially on the closeout section here at Main Break, she was always going to be tough to beat. I’m looking forward to heading to Rottnest now and hopefully get past the Quarterfinals once again.”

The opening women’s Semifinal saw Bronte Macaulay (AUS) paddle out with huge support from the surfing world and local community. Macaulay showcased incredible commitment and courage throughout her heat, posting the highest single wave of the matchup but was unable to find a backup. Weston-Webb won the heat to progress into the Final, while Macaulay took her best result at Margaret River and the equal-best result of her career along with gaining huge admiration from her fellow competitors and surf fans around the world.

Carissa Moore (HAW), who led the rankings heading into this event, looked certain to progress into her third Final of the season as she tore through the field posting massive heat totals in every round but the semifinals where she was pipped at the post by eventual runner-up Gilmore. Similar to Moore, the men’s reigning World Champion Italo Ferreira (BRA) was unable to progress through his Quarterfinal heat with compatriot Filipe Toledo. Although he finished in equal 5th place, Ferreira hangs on to the second position on the 2021 WSL rankings.