The Path of the Spartan / The Michel Bourez Interview 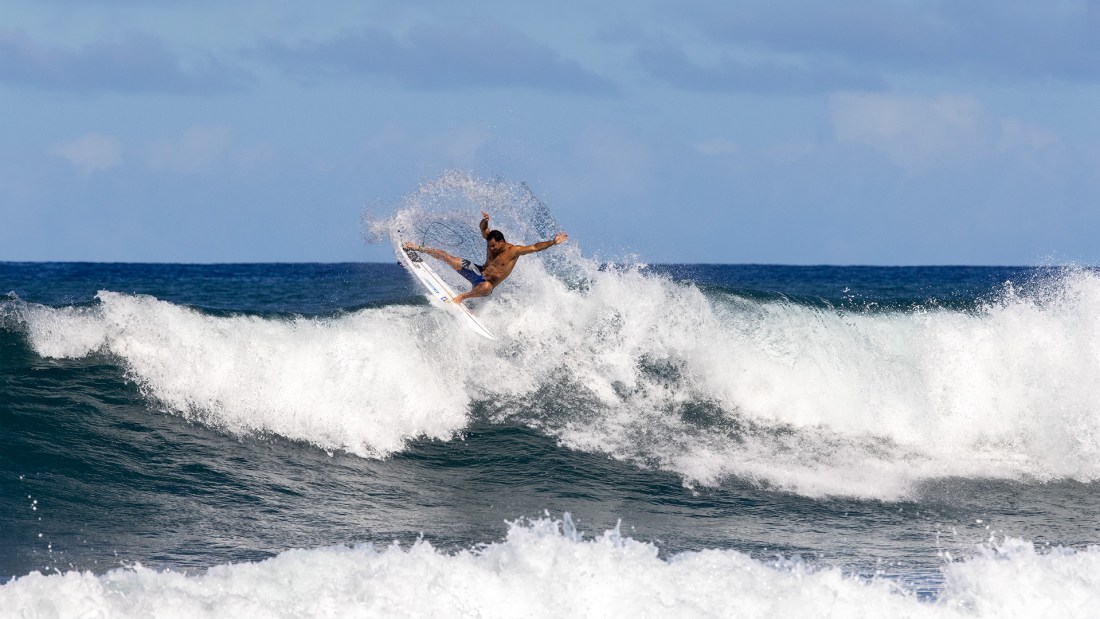 One characteristic that separates the surfing of the competitive elite of the last decade or so, from previous generations, is the prevalence of aerial surfing. No maneuver illustrates this point more definitively than the frontside air reverse. At its zenith it was almost comical how many times you would see it being used in competition. Tahiti’s Michel Bourez rose through the competitive ranks at the height of this new aerial phase. But, Bourez was one of the few surfers of the last generation whose surfing is completely devoted to power. What could seem like a holdover style from generations past, Bourez molded to adapt to the modern competitive arena. Coming from the remote islands of French Polynesia, largely removed from the global competitive circuit, Bourez had no choice but to blaze his own trail. This circuitous path helped forge one of the most iconic and well-respected surfers of the last decade.

What was growing up in Tahiti like?
It’s like growing up here in Hawaii, it’s the same thing. We are surrounded by water, so you always end up playing in the ocean. It could be surfing, paddling canoe, or just playing with your friends. So that’s what I did at home. I used to go to the beach with my older brother and, and we used to live right in front of a reef pass. So whenever the swell gets big, there’s a little wave that breaks near the shore. Everything started when I was around eight years old, I wanted to do the same thing as the others. Following their path, and trying to do the same as them, and trying my best. And, at one point I was standing up on a surfboard.

What is life like for Michel Bourez?
Life is simple for me. I don’t ask myself too many questions. I just live day by day. I have plans of course, in the near future and I have my family too, and they’re the priority always. But, with the COVID situation life is different. In the big picture I really can’t complain.

But, I hope we’re going to be able to surf the contest again this year.
Looking past this crazy last year and the Covid situation, How do you feel about the path of life that you have forged?

As a professional surfer, I’m super happy about what I did, and what I accomplished on my journey. I have a couple good results, a couple of CT wins, and a couple QS wins as well. And, just to be able to still be on tour at my age, I’m 35. I’m getting old. Haha! The body is fine, the mind is fine, but the fire is kind of getting smaller. Obviously, I have my family back at home and I have done the tour for years already. At one point I’m going to have to stop. It could be in a couple of years or it could be tomorrow. I don’t know. I’m just going to go day by day and see how it goes

It seems like a dream job, when did it become a dream for you?
When I was younger I never thought that I could become a professional surfer just because it was too far away. I didn’t have sponsors at the time and I didn’t know how to get there. There were a few Tahitians that succeeded back in the day, Vetea David, Hira Teriinatoofa.

Growing up, with the VHS tapes back in the day, I’d be watching Kelly Slater, Shane Dorian, and all the Momentum guys. It was weird to think that life was possible, it didn’t seem it was meant to be for a Tahitian.

Obviously we are so far away from everything. But, the luckiest thing we ever had, till now, is Teahupoo. That wave brought so many good surfers around the world, and the media. The whole world was focusing on that wave for a certain amount of time. And, after being able to surf that wave, that’s when I told myself, okay, it could become a dream. I was around 17 years old. After I graduated, I said, “Okay, I’m going to try, see how it goes, I’m going to give myself five years, and by the time I’m 23, I have to be on tour.”

When was the first time you traveled outside of Tahiti for surfing?
I was 14 years old. I went to Bali, with the Tahitian team, for the ISA World Junior event. It was the first time that I actually could see all the kids, from other countries surfing and to see the level of surfing, so I could like measure myself. I could finally know exactly where I was around the best surfers of that age at that time. So it was a good experience. I remember making the quarters, but at the same time to me, it wasn’t like make-able. It was like, “Okay, I made the quarters. But, there’s no way I can make the final, you know, I have to be from Australia, from Brazil, from another country, like there’s no Tahitians gonna make it happen.”

But after years and years, I told myself, “Why not try?” Around 18 years old, I started to travel, for the pro juniors around the world, Australia, Europe, and started to do the QS as well when I was 20. Because I got second in the WSL World Junior Pro behind Kekoa Bacalso, my good friend from here in Hawaii. And back then, we both got the wildcard for all the high higher rated QS’. Then I could really compete against the world. I gave myself three years to succeed at that time. And if it doesn’t work, I’ll go back home to work. But, it worked!

What were some of the pivotal moments for you along your journey to fulfill your dream?
When I was 19 years old I went to Australia and I made a semifinal at a Pro Junior, and the guys in that event were like the best in the world already. So I told myself, “Wow, I made that happen? Maybe I could get a sponsor, you know?” And, I ended up getting sponsored by Quiksilver and I went to Europe to follow the Pro Juniors series. I finished fifth in the rankings and they were taking the top five to represent the Europeans in the World Juniors Championship. And that’s when I got second. That was an amazing feeling, it felt like the doors were finally open at that time.

Then I got into the top 100 on the QS my first year, second year, I was in the top 50, and I told myself, “Okay, now I know everything I need to know, I need to qualify.” We came here to Hawai’i for the Triple Crown at the end of the year. We’re at Hale’iwa, there’s good waves, and I really like that beach. And it wasn’t big. It was probably like four to six foot only. But, there were amazing conditions. I couldn’t believe it. I needed to make the quarterfinal to be in the top 10 to qualify for the CT. I made the quarter final. And then I made the semi’s, then I made the final, and then I ended up winning.

To me, it wasn’t exactly a dream come true. Because, it was something that for so long I thought I couldn’t reach. I wanted to make it happen, but I just thought there was no way I could succeed. It’s a hard feeling to describe.