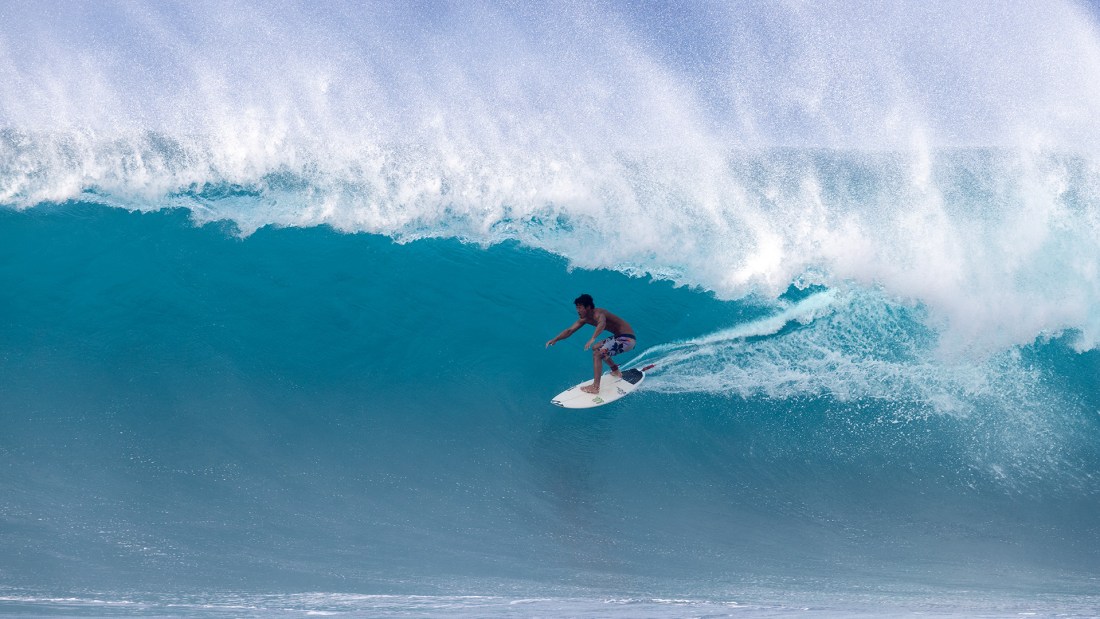 Seth Moniz, the youngest of the venerated Moniz family, has been steadily making a name for himself on his own merits for some time now. Culminating with his breakthrough debut on the WSL World Tour, earning himself the 2019 Rookie of the Year Award. True to the Moniz family legacy, Seth is humble to the core and epitomizes the well-worn motto of, “Let your surfing do the talking.” We caught up with Seth at the end of an incredible North Shore season, where he played the role of standout everytime he paddled out.

From the outside looking in, I’d imagine everyone probably expects you to perform well in Hawaii, just because you’re from here. What’s it really like for you?
There’s always improvements you can make out here on the North shore. It’s a never ending game.
Growing up here, you always have that, “Oh, you grew up there so you’re, you should be good at it,” but you still have to put the time in like everyone else. You gotta surf these waves as much as you can. And every day I learn more and more, every time I surf each of these waves. Honestly I think this was one of my better winters so far, even though I didn’t do as well in the contests as I hoped. I felt like I had a really fun winter and learned a lot about my surfing and learned these breaks even more. It really shows with the guys that put in time over here, like the Colapintos, Crosby, and Griffin, they’ve been killing it because they’ve been surfing here the most. Anyone can come here and just put in the time over the years and you’ll get rewarded eventually.

Was there any advice about surfing on the North Shore that you got along the way that really sticks out?
The main thing the older guys would always tell you is to put in the time at these breaks, whether it’s bad, or if it’s big, no matter what, just be out there and put in the time.

My dad always told me to go out there and have fun and don’t get too stressed about it. Once you’re stressed out about surfing, then it’s kinda pointless, you know? That’s probably the best advice I’ve got.

Being that you’re coming from the other side of the island, what kind of forecast gets you psyched to come out to the North Shore?
Probably a Pipe swell, west/northwest swell. That definitely gets me excited. That’s those drives up here from town are super easy when it’s like that. Haha. But, I’ve been mixing it up this season more than I’ve ever had. Surfing Hale’iwa and Sunset just as much as I surfed Pipe, which has been sick!

Who have you been surfing with the most this season? How has their surfing been pushing you?
I surf with Griffin [Colapinto] probably the most out of anyone. We’re always kind of like battling each other. I feel like when Griffin surfs, you can tell he’s really focused and is always trying to learn something, always practicing, he’s not just surfing to surf. That’s one thing that inspires me, just the way he focuses when he surfs. And, we get to kind of pick each other’s brain on stuff like that.

I’m also surfing with his little brother Crosby, my brother Josh, and Ethan Ewing, we all just push each other. I think that’s how you get to be the best.

Your brother Josh had some great moments this season as well, what’s it like to see him really take it to that next level?
Josh, myself, Parker Coffin, and Ezekiel Lau went to the Mentawais during the dead center of the pandemic. I came home right after the boat trip and Josh stayed there for another month and I swear he came home a different person. His surfing really improved and he just had this mental psych, I could tell he was super frothed for the winter. I think he got to spend a couple of weeks with Kelly [Slater] and I’m sure he took some secrets off of Kelly, Haha!

He’s been surfing better than ever. He won one of the two comps that ran this winter. That’s something for sure.

Is it frustrating to not have him on tour with you?
It’d be so much easier if we could travel together because we work really well together. We did the QS together for the last three or four years and it was kind of weird not having them there, even though I’ve only done one year and tour, but I think he’s going to get there soon. We’re cruising, Haha!

How competitive are the two of you, and the rest of your brothers?
Josh and I are probably the most competitive, just because my brothers are kind of older than us. We’ve grown up together doing the same things, whether it was fishing, diving, or surfing. So yeah, we’re pretty competitive. But, I support him more than anyone else. I’m more stoked to see him win sometimes than myself, honestly, I get super stoked for him when he does well.

What were some of the craziest/most impressive things you witnessed this season?
There are moments that happen all the time, just this morning, this little Billabong grom Canon Carr got the wave of his life. And stuff like that happens right in front of you all the time. It’s really cool because we were, we were doing the same thing five or six years ago, you know? Surfing little backdoor and getting your first real waves. This morning, that little kid, I think he’s 14, got the wave of his life right here on the North shore. And, that’s what it’s all about. Watching kids go out there, and have fun, and they’ll maybe get a bomb. That’s how it all started for all of us. You get that one wave and you’re hooked, you’re a fan of the North shore for life.