The GOAT Steals the Pipe Show Once Again 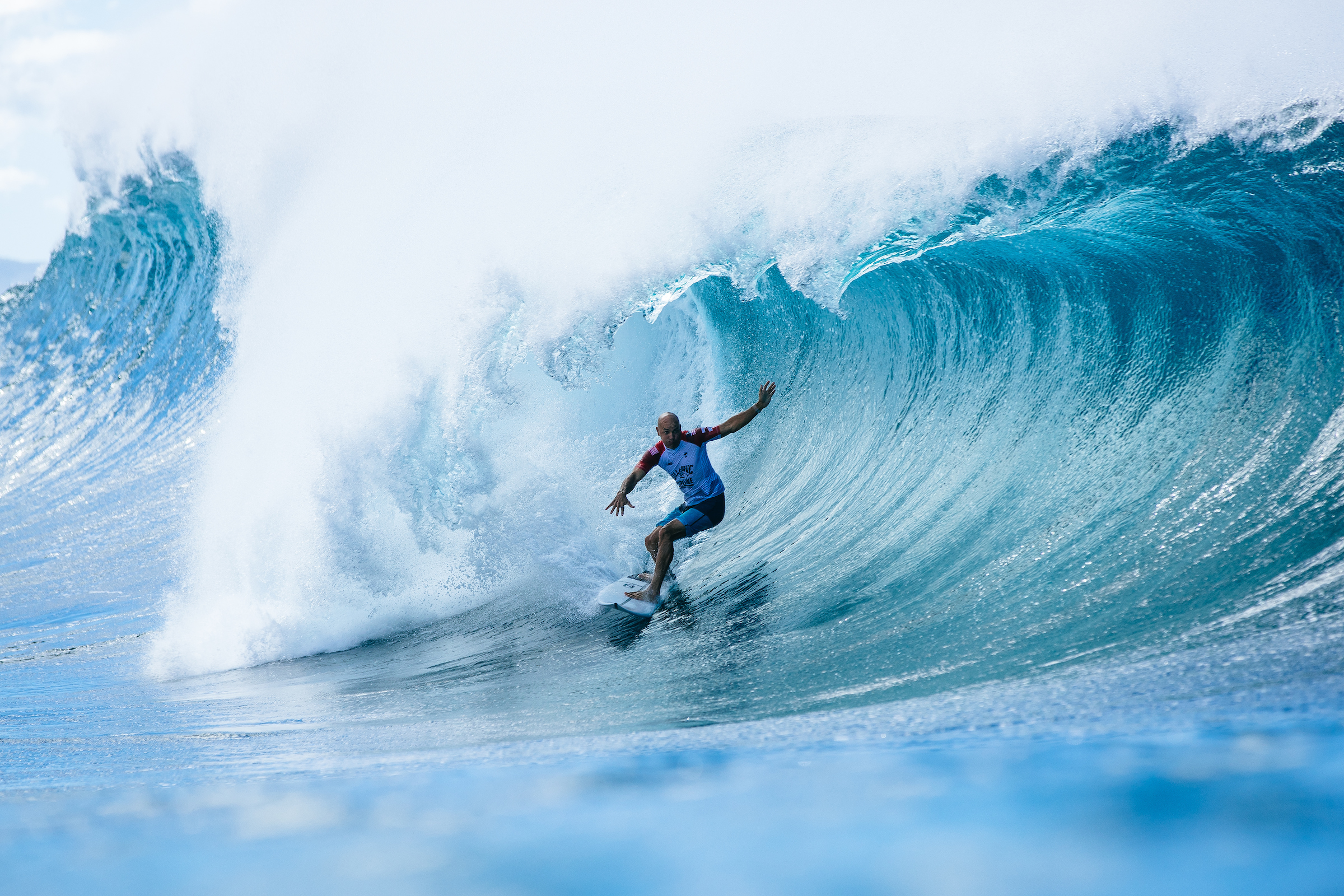 Yesterday’s competition of the Billabong Pipe Pro was an absolute sight to see. Set in some of the best conditions the North Shore has seen all winter, the top ‘CT names put on a hell of a performance. And if you’re on any sort of social media–or tuned into the action live–you know one of those names is Mr. Almost-50-Years-Old Kelly Slater. Taking a win over the young standout Barron Mamiya literally on the buzzer, the GOAT looks ready for another Pipe victory. Rewatch Slater’s epic performance above, continue reading for the WSL’s recap below and be sure to tune in today for another official call:

The Billabong Pro Pipeline, the first stop on the World Surf League (WSL) 2022 Championship Tour (CT), saw another epic day of conditions with a building swell into eight-to-twelve foot surf at the world-famous Banzai Pipeline. The men’s field is now down to eight competitors after finishing the Round of 32 and Round of 16 with the overlapping format. Today’s competition saw no shortage of near-perfect rides, upsets, and buzzer-beaters to set the stakes for the men’s Quarterfinals. The next call will be tomorrow, Wednesday, February 2, at 7:50 a.m. HST.

Round of 32 action started off in slowly building conditions and saw event wildcard Barron Mamiya (HAW) win Heat 1 against World No. 4 Conner Coffin (USA). Mamiya advanced to Round of 16 to fulfill his dream of surfing against 11-time World Champion Kelly Slater (USA), who dominated Heat 2 against rookie Jake Marshall (USA).

“I love Barron! He is a really great guy and an awesome surfer,” said Slater ahead of the matchup. “He is that kind of wildcard that you have no idea what he’s going to do out there. I think everyone recognizes him as one of the guys to beat. He’d be sitting at the top 10 of people you expect to do well at Pipeline.”

Mamiya applied pressure to the seven-time Pipeline victor throughout the first heat of the Round of 16 and was able to keep the lead on the scoreboard until the final seconds when Slater was gifted a buzzer-beater wave to take the win with a 9.23 (out of a possible 10).

“There was less than twenty [seconds] when I saw that wave. That’s why we do it, that’s what it’s all about. Just having a moment like that,” continued Slater after advancing to the Quarterfinals. “I know it’s early in the contest, but Barron’s the next generation out here and it’s just a pleasure to surf against him. I was trying to process the heat. I made a few errors on waves maybe in the first half, and he really capitalized. He was sitting really deep, [taking a] really aggressive line and I was sitting where I was lining up earlier because I thought there’d be some rights that would sneak wide. I just wasn’t feeling it and then I just calmed down and thought either a wave’s going to come through or it’s not, and I’d be happy for Barron. It’s just crazy thinking back on 30 years, how many times it’s happened to me and gone my way.”

Two-time WSL Champion John John Florence (HAW) also advanced to Round of 16 with ease after winning against rookie Jackson Baker (AUS). Florence then battled Brazilian rookie Joao Chianca, who defeated event favorite Jack Robinson (AUS) in the Round of 32 and put Florence to work on improved conditions. Shortly after Florence found Pipeline magic of his own to garner a 9.77, Chianca found near-perfection in a 9.87. Florence defeated the rookie with a 1.03 point difference and advanced to the Quarterfinals, where he will face Seth Moniz (HAW).

“It was a hard heat,” said Florence. “Joao’s wave was incredible. I was in the front seat watching it, and I was just happy and not happy at the same time. We had a good heat the other day, where we both got some good scores. So I was a bit nervous facing him again because he’s been charging out here. It looks like he really knows this kind of wave. So when the waves started coming I knew he was gonna be on the good ones too.”

Besides Coffin’s and Robinson’s eliminations in the Round of 32, three other upsets shook the competition this morning. World No. 6 Griffin Colapinto (USA) lost his heat to WSL Replacement Caio Ibelli (BRA); Kolohe Andino(USA) could not overcome rookie Lucca Mesinas (PER); and Kanoa Igarashi (JPN) eliminated Owen Wright (AUS), a favorite in heavy barrels. Ibelli, Mesinas and Igarashi also won their Round of 16 heats and advanced to the Quarterfinals.

“I have so much respect for Owen, he is one of the best ones out there,” said Igarashi. “In days with a short lineup like today, you have to think about your competitor and keep a close eye on him to know where they are. Two feet can make a big difference when positioning yourself there.”

The swell picked up into the afternoon as the Round of 16 match-ups got underway with more surprising results. WSL Champion Italo Ferreira (BRA) faced fellow Brazilian Miguel Pupo in Heat 3 and Pupo, at the 12-minute mark, found a Pipeline gem of which he re-emerged after being deep inside the barrel to earn a 7.33 and eliminate the 2019 WSL Champion.

Rookie Samuel Pupo (BRA) followed his brother’s footsteps and also managed to eliminate a CT veteran from the competition, Jordy Smith (ZAF) in the last heat of the day.

Mesinas got to walk through the Round of 16 to the Quarterfinals as Carlos Munoz (CRI) was unable to finish the heat due to injury. Munoz dislocated his shoulder during the Round of 32 and tried to recover in time for his heat. After receiving clearance from the doctors on-site to compete, Munoz started the heat but felt his injury while in the water and had to leave the competition.