The Return of Live Competition Stumbles with Rumble at the Ranch 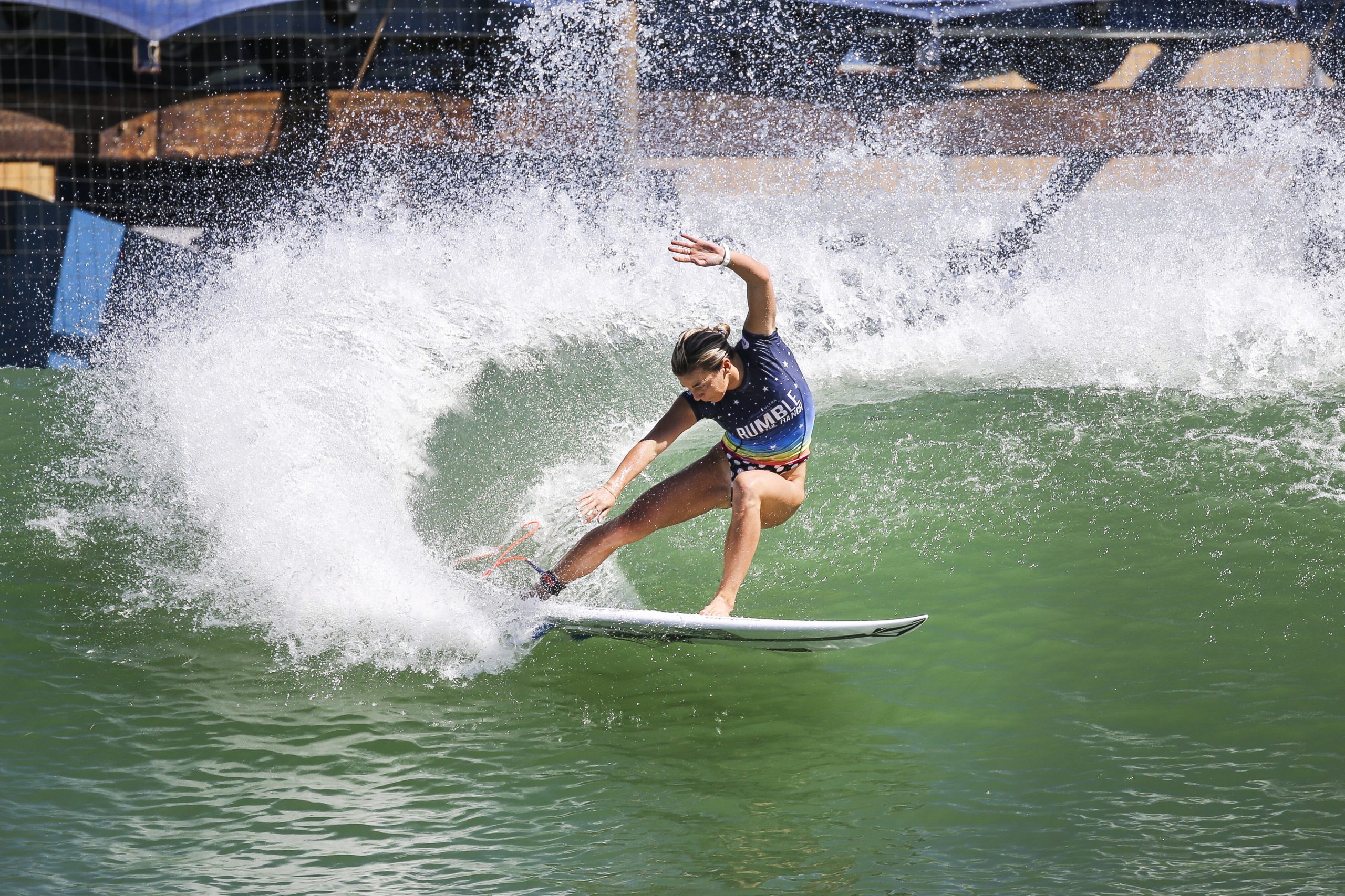 The WSL’s return to live competition took about as long as an NFL football game from start to finish. Think that was an accident? With the WSL re-thinking and re-tooling the sport these past 6-months, the Rumble at the Ranch, which ran yesterday at the Surf Ranch in Lemoore, was a made-for-TV package that seemed to reaffirm the WSL’s intent to model itself after the NFL and NBA, and yesterday’s specialty event felt like another step in that direction.

At the WWE-sounding “Rumble”, 8 teams of one male and one female surfer were assembled up after their names were drawn at random out of a hat. The cool thing was, for the first time ever, the men and women competed together at the same time, and it was interesting watching them work and surf together. Remember: This was not a normal ‘CT event and so nothing was actually on the line, it was simply an opportunity for the WSL to try to entertain and experiment.

That said, the event got off to a very slow start, which was only worsened by the myriad technical fails with the stream on the WSL site. With each surfer only getting one right and one left, and the best single score from each surfer being combined, safety surfing was inherently encouraged. While the mixed doubles teams were interesting enough, the surfing in the first round — the quarterfinals — was painfully boring. Maybe it was nerves, or maybe it was the fact that riding two 45-second leg burners back-to-back after 8-months away from competition is physically exhausting. Filipe Toledo fell. Seth Moniz fell. Coco Ho fell. Basically every surfer slipped or crumbled on their first or second wave, and during the first hour only a single surfer scored above 8 points, and of course, it was the wave’s creator.

Coco Ho, slashing her way to the podium yesterday.

In the last heat of the first round, Tatiana Weston-Webb (teammates with Kanoa Igarashi), needed a 7.7 to take down Griffin Colapinto and Lakey Peterson, and scored a 7.93 for an extremely clutch left that she absolutely shredded. That’s the nail-biter scenario the WSL is chasing in an event at The Ranch, but even in a controlled environment like Lemoore, it’s hard as hell to produce, and by the time the semifinals started, a couple things about the event stood out: 1) They probably should have had the surfers ride alternating waves, rather than a right and left in quick succession, to give each surfer a break and promote more radical surfing, and 2) The “rebate wave” the WSL was originally promoting would have added another layer to the event, and there was no mention of why it was axed from the format.

In the last semi, 2 and a half hours into the broadcast, Kanoa Igarashi scored the day’s first 9-point ride, doing exactly what the kid does best. Starting and ending with two flawless airs, it was a near perfectly-surfed wave, which helped propel him and Weston-Webb into the final against Toledo and Ho. Of course, as expected, Toledo saved his best surfing for his first right in the final. Taking a page out of his 2017 J-Bay playbook, he launched two alley-oops on the same wave for a 9.67 and the best wave of the event, hands down. Paired with Ho’s 6.5, it was plenty enough for the win and 10k check. Except, rather than keep the money, for this event each team chose a worthy charity to donate their winnings. Toledo and Ho picked an uncontroversial org: the Surfrider Foundation.

That hints at a big difference between the WSL and mainstream sports like the NBA. On the webcast before the finals, it was mentioned that both remaining teams chose Surfrider to donate their winnings. Surfrider is a great organization, to be sure, but considering what’s going on in the world right now, the choice does feel a little tone deaf. COVID-19 has killed more than 730,000 people worldwide, millions of Americans are out of work with many relying on food banks and other mutual aid networks to survive, and the country is experiencing a movement for racial justice unlike anything we’ve seen in half a century. For comparison: The NBA returned from COVID playing out the rest of the season in a bubble in Orlando, Florida with Black Lives Matter painted on its court. The league even reached an agreement with its players union on 29 social justice statements that players can choose to have on the back of their jerseys instead of their names, including “Say Their Names”, “Vote”, “I Can’t Breathe”, “Justice”, “Peace”, and “Equality.” 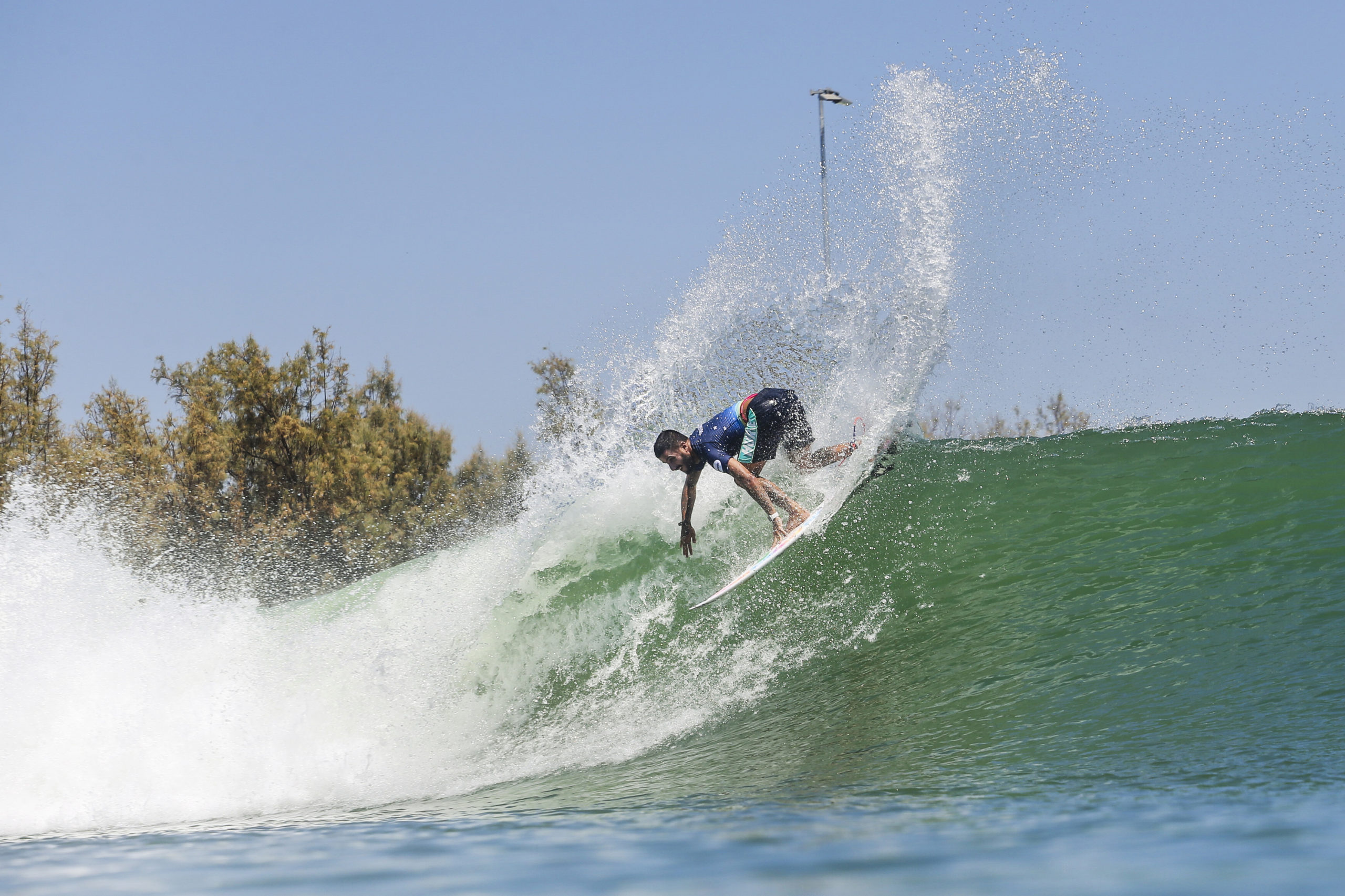 Filipe Toledo, getting right back into the swing of things.

The WSL and its surfers may want to stand on neutral ground on these issues, but in this moment the ground is shifting beneath them. Instead it feels like competitive surfing has missed an opportunity to connect with its audience by standing for something other than mechanical surfing.

Beyond that, with no points at stake and no world title on the line, live competition in Lemoore some of its luster — not that it necessarily had a ton to begin with, being the least favorite Tour venue of many competitors and fans alike. For the surfers, the idea of a max of six waves total to perform on didn’t appear to incite the most inspired surfing.

So what will the next two specialty events feel like in Australia? Will strike comps in pumping surf do more to get the blood flowing? Or is pro surfing inherently less-than-exciting-to-watch when every heat isn’t actually building toward a title? In some ways, yesterday’s Rumble was still a respite from the stress of COVID times: a reminder of a time when we argued over scores, the relevance of wave pools and whether or not a male surfer from anywhere other than Brazil will ever win a WSL event in Lemoore. It’s better than nothing.