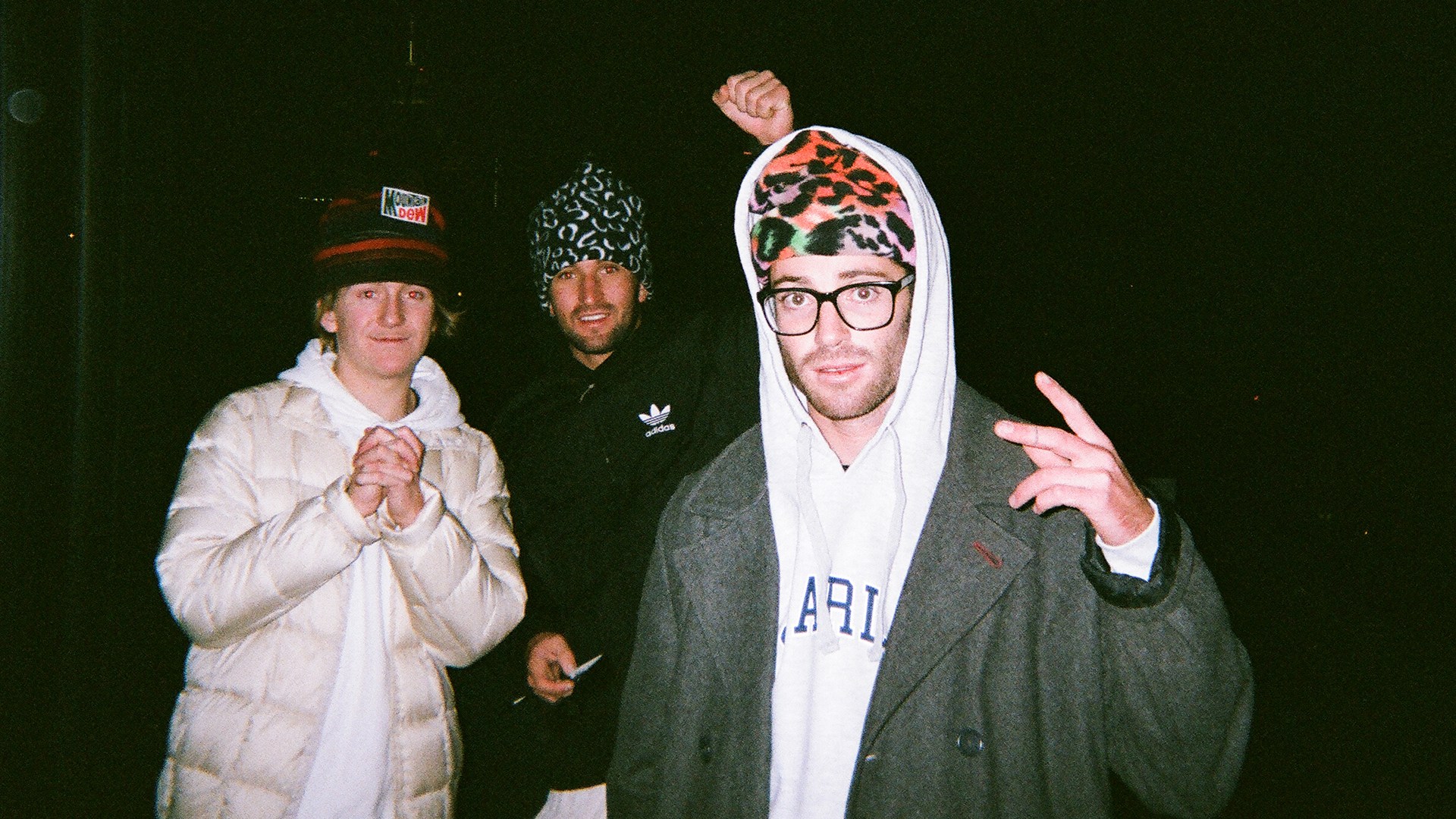 There is No Such Thing As An Ugly Hat

To pass some time while cooped up at home, we hopped on a terribly spotty Facetime to interview Blake Axelson AKA the guy behind the polarizing Clique Worldwide fleece hats that seemed to pop up at every resort we visited this winter. They also started to show up on pros heads from just about every walk of snowboarding. Some call them ugly, some can’t get enough. Whatever you call them, they are hard to get ahold of. Making just a handful with each fabric for his friends and then announcing small leftover batches on Instagram, Blake has been selling out quickly after each release. We caught up with him while confined to his home in Southern California for a bit more. Enjoy.

Frankly, this interview is pretty late. It is a bit warm for fleece hats right now… but we finally have some time locked in our houses. How are you doing?
Blake: I’m doing pretty good. Been working on some new hat ideas for Clique and just setting up the house to sew more in here… The whole quarantine situation is helping that part, but you can’t really go out and get fabric right now.

Is Joann Fabric closed?
Yeah, it is super close. Like five minutes. It is super sick, those ladies love me in there.

Is Joann Fabrics CLOSED?
Oh yeah, it is super closed right now. But you can order stuff online… I haven’t yet. Probably will tonight though. I need some fabric for Gabe Ferg… maybe going to make him some sweat pants.

I’m not going to write too much for your intro, so tell the people who you are.
I’m Blake Axelson, 25 years old. Snowboarder from Basalt, CO. Don’t really know at this point. Hat Maker? Currently living in Oceanside, CA. with the Gerard boys (Red’s older brothers Kai and Trevor), Drew Hastings, and occasionally Nik Baden. People stop by a lot to come surf and skate.

Are they still dropping by during Corona?
Nope. We are pretty quarantined up. 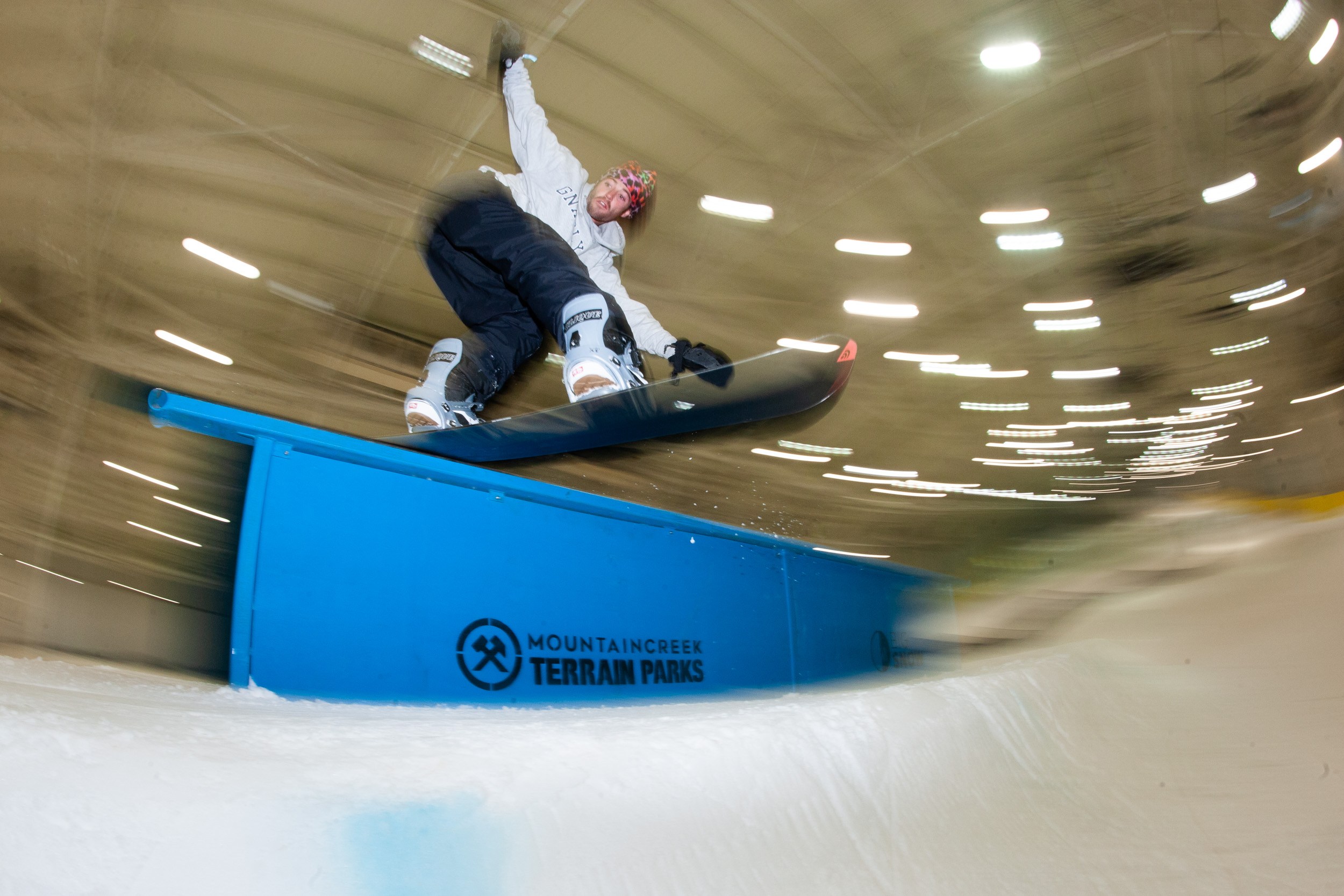 Blake Axelson in one of his own hats just outside of NYC.

Is it true that you guys have been kicked out of a few houses prior to this one?
Yeah… I think this is the third house? Red, Kai, Trevor and I were kicked out of the first one because we just had too many cars in the driveway and we made a decent amount of noise, we were a “nuisance to the neighborhood.” It was pretty nice there, but we probably shouldn’t have ever rented in a place with a housing association. We didn’t know there was one when we moved in… Our second house was found in a rush since we were kicked out of the first spot. We never even really unpacked there. There was a super nice pool table right when you walked in. The one rule was don’t mess with the landlord’s pool table, but of course that ripped. No idea how that happened. We were moving out and there was just a huge tear in it. I actually sewed it up and we were never fined for it. That was probably about a year ago, but I doubt they have even taken the cover off.

That’s good. Now, what is Clique?
Not exactly sure what it is yet. It’s just me… making stuff for my friends as of right now and selling some of it online. We will see where it goes. It is fun to do one-off drops whenever I have the time and make stuff that my friends like wearing. Eventually, I would like to grow it into something bigger but I only want to release stuff I think is dope.

Weren’t there some Clique snowboarding edits before your hats?
Oh… yeah! Haha, I guess so. I forgot about those. Just a few. We called them “Call The Hospital” edits because all the guys we were filming were turning necks so fast people were getting hurt just watching them. We were also all doing art out of the house before I start making the hats. It has just been a rolling idea.

What kind of art?
A bunch of acrylic paintings. Brock Crouch and I, and basically anyone that stopped over, would just start throwing ideas on a bunch of different canvases. We painted a ton after he was injured and recovering in Southern California.

Good, but I have a problem. from CLIQUE on Vimeo.

So where did you get the idea for the hat?
I found an old cool hat at my mom’s house in her closet. Started wearing it a bunch and then just looked at it and thought I could make it pretty easy. Turns out I couldn’t make it pretty easy. It was pretty hard… but that got me into making hats. Went through a ton of versions until I found one that I liked and felt like I could recreate.

Did you think people would like them?
I didn’t think they would at all. The first round was like two years ago. A few of our friends wore them to X Games and people were complimenting them… but then it just kind of went on the back burner.

And what made you pick it back up?
Didn’t do much with it for awhile… made a few hats for my friends… but hen I made some before we all went to New York for that snow dome opening and people kept asking about them. Seemed like everywhere we went people were asking (probably because there was five of us wearing the exact same hat). They asked enough that I thought I should probably try to make some more. Basically, when we got back… I have just been sewing every day since. Learning new tricks with every hat. 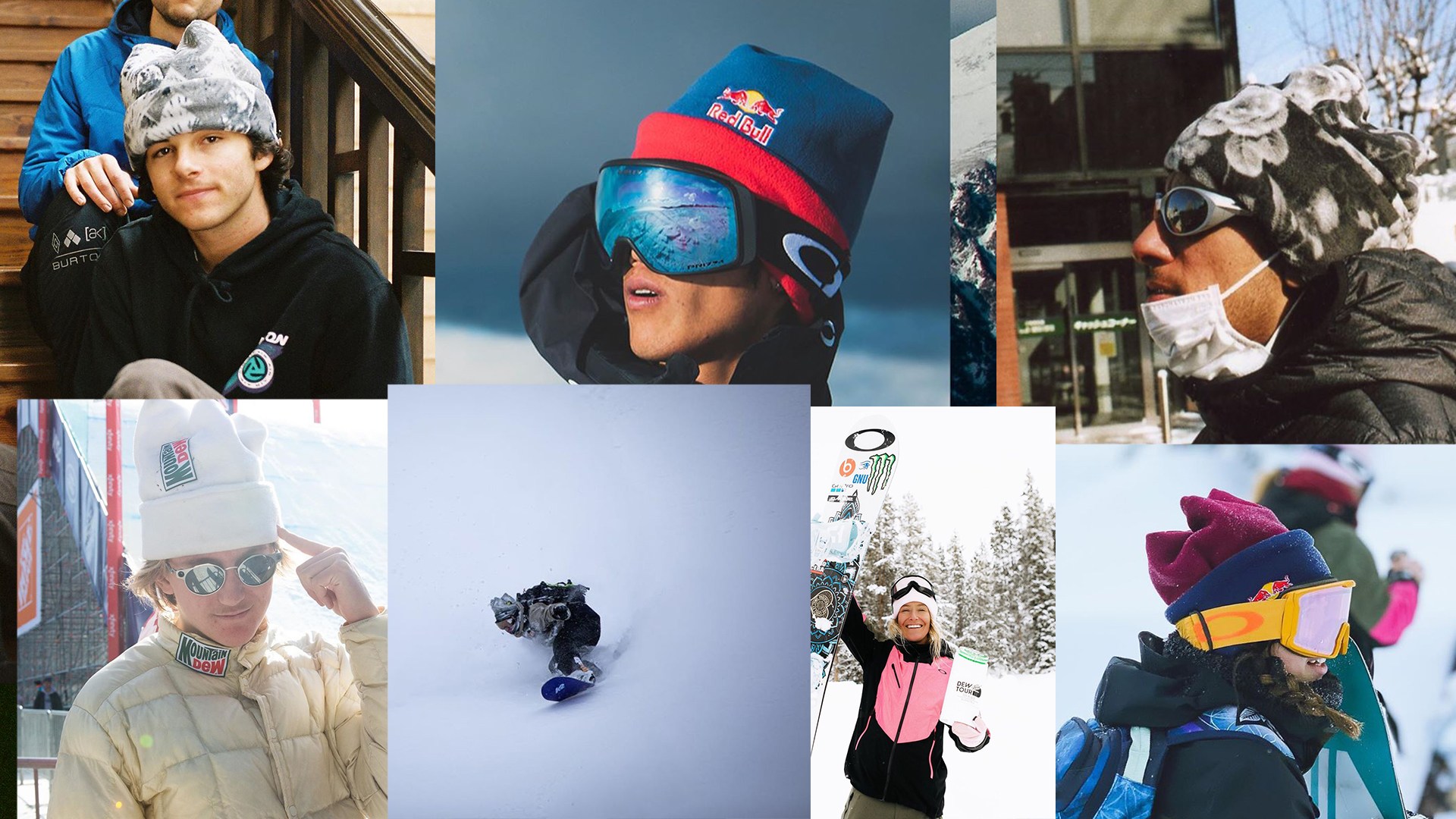 A handful of photos pulled from Instas.

By hand or by machine?
Machine. Sewing machines are pretty gangster.

I have seen them at just about every resort I have been to this winter. Why do you think it took off so fast?
It was kind of a unique look at the time, they are all pretty different. Plus all of my dawgs were wearing them. Baden, Red, Kai, Trevor, Gabe Ferg, Luke Winkelmann. They really kicked it off pretty quick.

And what would you say to people that think your hats are ugly?
Bad ass. People are entitled to their opinions, doesn’t hurt my feelings.

Who have you been the most shocked by wearing your hat?
Some of the different riders that have worn them…I’ve just been blown away. There is a huge list. Everyone from Danny, Red, Jamie, Blum, Hailey… just stoked on anyone that likes them.

Have you seen anyone outside of snowboarding wearing them?
Haha, I saw one kid on Insta that looks like he just drives cars or something… haha but mostly snowboarding. Some moms, too. I love moms.

Anyone helping you?
My mom… she is teaching me the business side of it.

Are you going to make a stockpile of hats while you are in quarantine?
I have some ready to go… thinking about making some fleece condoms for when quarantine is over and everyone is all over each other. But for real, I don’t know. This quarantine is pretty funny. Nik Baden is currently here, and is going to be here for the rest of quarantine so it is pretty difficult to get anything done. I draw a lot of inspiration to create from traveling but this has kind of forced me to get creative in my home. Been making a few masks… but we will see.

Do you think this interview is for the better or worse for your “brand”?
Probably worse the way I am answering the questions… but you aren’t really asking any good questions.

Fair. How about a go-to drink while in quarantine?
Vodka and juice. Whatever juice you have in your house. You can mix Vodka with just about any juice and have a great day.

Have you tried it with milk?
No. I am lactose intolerant.

Have you tried it with just water?
Yep, tastes like vodka.

If you had to compare your hat to a food, what dish would it be?
The appetizer. No clue what the main course will be.

So is there anyone you would like to thank at the end of this interview?
Sure.

Alright, well, this is the end. Who would you like to thank?
My mom. I hope she reads this and then makes herself a drink.