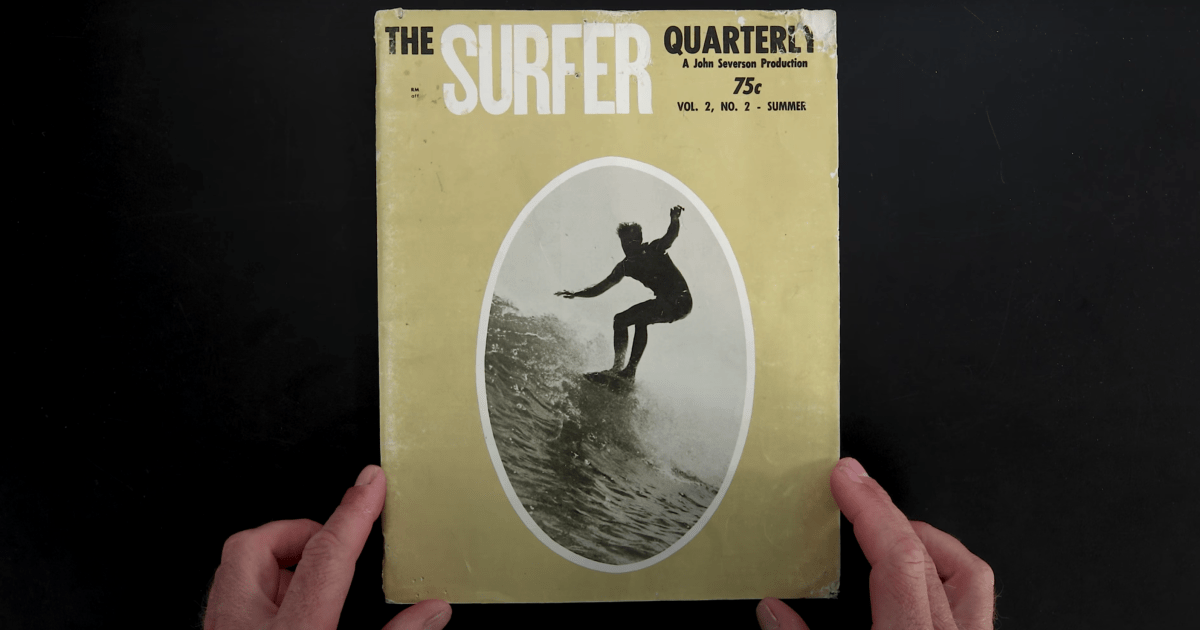 “Full of characters, fads and fantasies, surfing is perhaps the most colorful sport to emerge since the Greek bare-handed bullfights,” John Severson writes in the editor’s note that opens up SURFER Magazine’s 6th issue. Speaking of colorful, this is the first issue to feature a color photo; Ricky Grigg rolling into a Pipeline stunner on the cover.

Even in 1962, the Disneyfication of surfing is prophesied through wavepools. On the topic of surfing becoming a viral trend, Severson writes: “Help is on the way. Artificial wave machines are in the process of being built…as are powered surfboards. Next-somewhere between Anaheim and Buena Park-SURFYLAND! ALL YOU CAN RIDE FOR $1, ALL SIZES AND SHAPES! GET ‘EM WHILE THEY’RE HOT!”

There’s a Pipeline feature in which Mike Hynson and a slew of other brave surfers charge the world’s deadliest wave on the single fin logs of the day. Most are outrunning the tube or wiping out. Photos of the latter are captioned by Severson’s signature tongue-in-cheek voice; “He was only successful in nearly killing himself,” and, “Mike was making good progress until the whole Pacific Ocean caved in on him.”

SURFER’s international scope started to grow too, with features on Australia and France, exotic destinations at the time.

When SURFER Magazine (then, The Surfer) released the second issue of its third volume in the summer of ’62, it was greeted by a growing, surf-obsessed audience, but one still yet unfamiliar with the much with vast expanse of rideable waves out there in the world-at-large.

The Letters to the Editor section includes mostly fawning missives from waveriders praising the expanded editorial content (12 new pages in the previous issue!), and a few notes lamenting the character of the burgeoning crowds that would—save for the dated vernacular (“Gremmies” and “Ho-dads”), read like a complaint about our current state of surfdom.