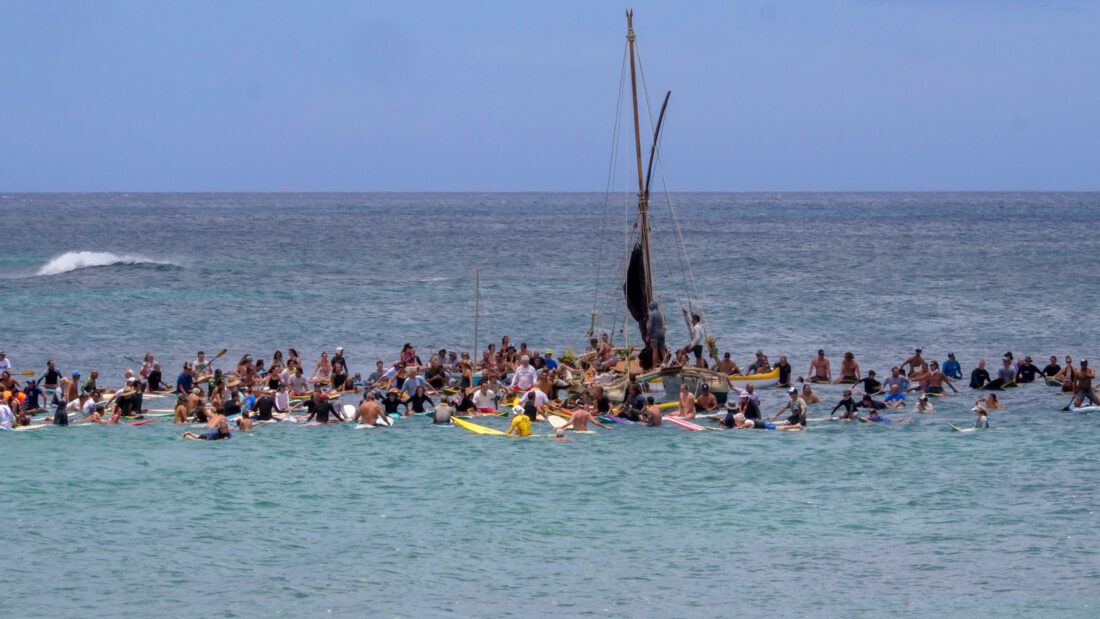 Family, friends, surfing icons and peers gathered at Sunset Beach this July 9th to commemorate and remember big wave surfing pioneer Peter Cole. Family man, prize winning swimmer, teacher and sage activist, Cole was a huge pillar of the Northshore Oahu community who passed away peacefully in his home surrounded by a loving family on Feb 6th of this year.

In a pre-paddle out tribute that could only be described as “legendary,” there were yarns and testimonies from friends and relatives that were heartfelt, funny at times and indeed inspiring.

Summarizing Peter Coles fearless prowess in large waves, Lucky Cole, Peter’s brother stated that, “If Greg Noll (another giant icon in big wave pioneering) was “The Bull,” then my brother Peter was “The Lion.”

Running with a crew of other surfing “hell men” like Fred Van Dyke, Buzzy Trent and Ricky Grigg, Peter gained “charger” status amongst this peer group. Cole’s verve and confidence in almost any conditions in the ocean was a direct reflection of his stellar prowess in swimming. Cole would often engage in big wave conditions most people wanted no part of.

Hawaiian living legend and masterful waterman Clyde Aikau took to the podium and eloquently gave thanks and homage to the late surfer as a man “Who consistently inspired me my brother (Eddie Aikau) to surf big waves on the Northshore. We would often wait for Peter and his wife Sally to walk down the beach at Sunset so we could all paddle out together…”

Others family members and friends who spoke passionately would tell of Peter Coles kindness, intelligence and passion for justice and integrity. Some would comment on his strong personality and for comic relief his physical partial blindness in his later years and how anyone who surfed with him KNEW to give Peter a very wide berth.

Past the big wave bravado and swimming competition stories, winning the Makaha International in 1958, it was hearing of his unswerving dedication to friendships, family, justice and kindness that got this publisher quite choked up. The world lost a great man, but his legacy and his positive influence are indeed alive and well with his family and friends and practically everyone he touched or knew him.

Hundreds of people paddled out with flowers, ti leaves and heartfelt good spirits to honor this man as his family returned him to the sea. It was a special day.

This tribute truly moved me. I then recalled something quite important to me now. Age 16, I paddled out on a large 10-12’ north swell at Sunset on my “5’11 single fin gun planning to ride the “end bowl” even though it was gurgling and jacking square at 6- 8’. My normal small board was 5’2 so I was comfortable on relatively small equipment. I was all of 125 lbs. Perched on the inside section I kept looking over and seeing these long walls coming in from deep “Boneyard” and connecting through the middle sections where most of the “big guys” were surfing. Guys like Mike Ho, Dennis Pang, Darrick Doernor, Dane Kealoha, Owl Chapman, Roger Erickson and Mark Foo were getting great rides, but I knew my equipment was a bit small to get the peak with all the top talent out there jockeying for waves. I paddled past that peak and ventured to the deeper section where the take-off was a bit mellower, and I could try to shoot right through the big bowl. I lucked into a massive set with a little crumble at the top and although late, I got one. Shaking the water out of my eyes from the messy take-off, I was joined by perhaps the biggest yellow surfboard I ever rode next to. As my eyes cleared lo and behold it was Peter Cole dropping into the middle section on what appeared to be a 10′ or 11′ board and the wave was a “grower”! I never felt anxious. I never felt cheated. I had speed and Peter gave me plenty of room so I knew I could make it around the big middle peak, and I knew right away I was surfing with one of the great pioneers of Sunset Beach. The man deserved respect. That said I was also warned and aware of his poor vision, so I followed him cautiously.

As the wave move ferociously into the steeper sections and then toward the jacking inside bowl I realized Peter didn’t even know I was there. I knew it I’d best aire on the side of caution and get the $%&@ outta there! I kicked out behind his trail successfully.

Looking back with tears of joy in my eye AGAIN trying to parley this, I always thought about that wave as “Wow I made it.” But after today it has become one of the most special moments of my surfing experience. I shared a set wave with a great man. A great surfer and a truly exceptional human. I am truly humbled and honored.