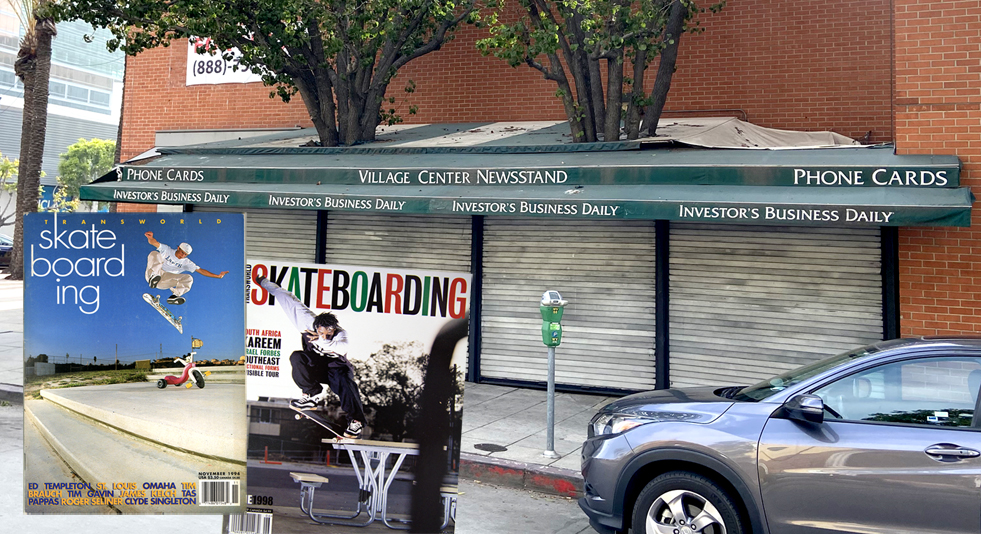 In September of ‘94 I bought the November issue of TWS at the Westwood Village Center Newsstand. I had just moved to the US for the first time at 17 to attend UCLA. After we grabbed a bite to eat at Falafel King on Broxton Avenue, my mother Inger (RIP), who had flown out from France with me to get me moved into the dorms, and I walked down to the corner of Lindbrook and Broxton to check out some magazines.

Pre-internet, I kept a tally on newsstands in the same way I kept a tally on skatespots. They were pivotal hubs and cultural oases—worldwide, in any city, airport or the most desolate of European villages—the place you got all your skate news, music news, and even world news. Newsstands, today all but extinct, were always the first place I would seek out in any new setting. That was where you checked in with your social media of choice at the time—magazines printed on paper.

The Nov. 94 issue featured fellow Euro transplant Chany Jeanguenin on the cover. I had seen Chany previously at the YMCA Skate Camp as a camper (and really good vert skater) in 1990. By Nov. 94, he was a bonified Planet Earth Skateboards am (and really good street skater) switch stance heelflipping a double set and Mickey Mouse Bigwheel for the lens of sir J. Grant Brittain.

Since I had first discovered skateboarding in the ‘80s, magazines were the instructional manuals. The first tattered issues of TWS, Poweredge, and Thrasher I had borrowed from friends at the American International School in Nice had educated me on every facet of the culture. By ’94 the photos, words, and ads printed on those pages represented everything I believed in. I promptly decorated my dorm room in Dykstra Hall with my favorite pages from the Chany issue (including an Alien Workshop ad featuring an upside down American flag with the words ‘The Star Spangled Lie’, a Josh Kalis Invisible ad, and half the James Kelch spread).

By the time I began actually working for the magazines—I got a job with Skateboarder Mag as associate editor in 2001, then eventually joined TWS as European editor in ’05—newsstands also became an extension of my mobile office; the place to see our finished product in the wild. I would marvel at the whole process, from sending in my words (sometimes from halfway across the world) to it being laid out with photos, printed, and bound then shipped back (halfway across the world) to end up neatly lined up on the racks of my local newsstand a few months later. It never stopped feeling miraculous, and I continued to buy copies of any magazine I saw on a newsstand with my articles in it up to the last issue of TWS.

In ode to the decades I spent keeping tabs on them, here are some key stands I always had on my radar and some golden memories I associate with them. Cue In Memoriam music.

1) Westwood Village Center Newsstand, Westwood, CA
After buying the Chany issue there, Westwood VCN became my go-to as I got situated in LA. I would stop by almost every night for a browse. I have a vivid memory of seeing Kareem Campbell’s Pro Spotlight (TWS by Atiba, June 1998, Vol. 16, No.6) for the first time there one night. I also met Preston Acuff (Long time West LA/Hot Rod skate crew member, Real Am, later Dogtown pro and Big Brother cover holder) there as he worked the cash register for a stint in the late ‘90s. When the last TWS video (at least as of this writing)—Duets premiered in October of 2018—I was mindblown when I saw the address was the Landmark Regency Theater right on Broxton. A stone’s throw from the newsstand that started my journey in LA, and right next door to the old Falafel King I ate at with my mom some 27 years earlier—TWS 30th video felt distinctly full circle.

2) NCE Airport, Le Relais Presse, Nice, France
Back in EU, airports were always the best for scoping out US and international mags. My local was the NCE airport Relais Presse. When I first got my name on the Skateboarder masthead in the April ’01 (Vol. 10, No. 5) issue, one of the proudest moments of my life was buying a copy there and showing the issue to my mother. I had flown home from LA for Christmas after only contributing a list for Skateboarder’s infamous “The List” page, but Aaron Meza told me he would add me to the contributors on the masthead and he did—right next to Marc Johnson. My mother was a photographer for a number of Condé Naste publications at the time along with a hefty glossy periodical sold at the NCE airport called New Riviera. As a skateboarder, I felt like I could finally show her my success on terms she understood. Forever thanks, Meza.

3) Ackerman Union Newsstand UCLA, CA
It didn’t take long for me to find more outlets for magazines in Westwood. The UCLA student store newsstand in Ackerman Union boasted a wide selection of titles. I have another key memory of standing there with the Nov. ‘95 issue of TWS with Kalis and The Golden Gate Bridge on the cover. Turning the pages from that incredible cover to discover both Guy Mariano and Eric Koston had Pro Spotlights in the same issue. Not only that, but it quickly dawned on me that Guy had a sequence of a switch hardflip (so far ahead of its time it was captioned a “switch inward kickflip”) over the grey marble gap right next door to Ackerman Union at UCLA’s Virginia Macdonald Medical Research building. I felt like I was standing in the center of the known universe.

4) Borders Westwood Blvd, Westwood, CA
The giant Borders on Westwood and Rochester opened during the late ‘90s, and whenever I had free time I started spending hours perusing their massive international magazine and newspaper sections, listening to music upstairs in the CD/DVD section, drinking coffee at the café or reading books. They even had VIZ—my favorite British comics from my tweens, and authors, poets and screenwriters would come do readings weekly. Today the building sits vacant. Although everything is available on the Internet today, the process of walking into Borders with no plan or idea and simply following whims remains a far better experience than staring at your smartphone in a cramped huddle for two hours. RIP Borders.

5) Brockton Press Center/Magazine Shop, West LA, CA
After we finished college, my friend Pat Canale and I moved across the VA from Westwood into West LA proper. I’m still raising my family in the three-bedroom apartment we signed a lease on in ’99 (I left back to EU for four years ’04-’08 then returned). Right around ‘02/’03 the small magazine/news shop just off Wilshire and Brockton became central to our morning routines. Our friends Robbie McKinley, Dan Rhodes, Mike York, and Chris Roberts all lived another block west of Brockton, and Bob K. who was then running the Crailtap site lived a few blocks East. The Brockton newsstand became a social hangout and meet-up spot of choice. Sadly, it closed around ’06.

6) Maison de la Presse, Place Massena, Nice, France
In the winter of ’04, I moved back into my parents house outside Nice, France with my wife and began attempting to stay connected to the skate scene from afar. It was more difficult than I had imagined. I had gotten myself fired from Skateboarder for some drunken idiocy at ASR and attempted to claw my way back into the magazine world. Working out of my friend Toto’s skateshop 4 Wheels in Nice, he quickly schooled me on the only newsstand carrying US skate titles in town—Maison de la Presse on Place Massena. By the summer, Skateboarder agreed to rehire me in some capacity, then Eric Stricker (RIP) and Skin offered me the European editor title at TWS. My first big feature was the Mike York Roll Call in the Nov. 05 issue. I will never forget walking into Maison de la Presse and seeing that issue sitting there. RIP Eric Stricker.

7) Schippoll Airport Newsstand, Amsterdam, Netherlands
Flying from LAX to NCE never had direct flights so I always ended up with connecting flights through either Heathrow or Schippoll in Amsterdam. Schippoll was my favorite because nobody outside the Japanese does pop culture like the Dutch. Amsterdam has some of the best book and magazine shops on the planet. The airport alone boasted every skate mag under the sun.

8) FNAC Plaça de Cataluña, Barcelona, Spain
From the fall of ’06 through ’08 I lived in Barcelona—sending in words for TWS while helping with marketing at Hurley’s EU HQ on Passeig de Gracia right above Plaça de Catalunya. For lunch, I almost always walked to FNAC, where the magazine section downstairs carried everything from the latest Kingpins, Sidewalk, Monster, Document and Sugar mags (with the Hurley ads I was placing), to the latest TWS issues I could see my finished work in. On the first day I walked over, I also noticed that the small street gap right in front was the one Arto had bs flipped and switch bs flipped in the opening mirror montage of his Sorry part. (Ali) Boulala, whose apartment was right nearby, would sometimes meet me for lunch at FNAC and shop for DVDs.

9) Foodland Lahaina, Maui, HI
By 2010, the magazine business was already teetering. Our page count had begun an irreversible downward spiral. The fat TWS phone book issues of the ‘00s were shrinking month-by-month and we spent the next decade essentially watching print die in slow motion. By ’11, there was rarely good news. However, on vacation in Maui visiting my former West LA roommate Flo, I remember being ecstatic seeing the Oct. 11 issue aka The International Issue on the check out racks at Foodland. It was one of the fattest issues we had put out in a few years (150 pages!), and I had conducted Lucas Puig’s Pro Spotlight in French. I was smiling for the rest of the trip.

10) Marck’s Newsstand, Brentwood, CA
During the final stretch of TWS print issues (circa ’10-19) I continued to buy copies of the mag every month at the Marck’s Newsstand in Brentwood. I would often run into Tommy Chong there. I had first struck up conversation with him as he and Cheech had a Flip (or maybe Mob grip) ad in TWS around ’12. In Jan. of ’17 I bought the last issue I saw in the wild—the Feb. ’17 issue with Dave Chami’s epic photo of Ben Gore with the Golden Gate Bridge in the background. That cover was of course in homage to Josh Kalis and Skin’s cover I had seen all those years ago at Ackerman. TWS continued releasing print issues through March/April 2019 but they no longer went to newsstands (I was able to buy those at Rip City Skates—thanks Jim). Marck’s meanwhile closed permanently following a campaign and Gofundme to save it in 2018. So long Newsstands, and thanks for all the memories.