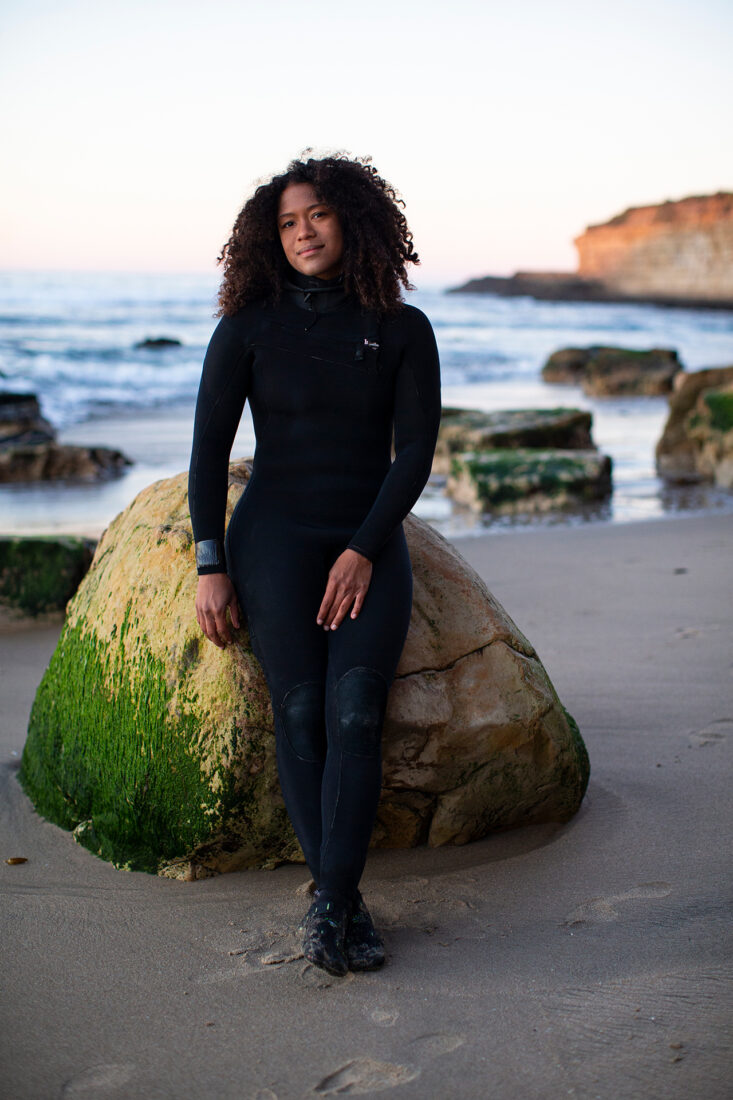 Sunset Ranch felt the opposite of what I imagined when thinking about the greatest surfers coming together. The address pulled me along a dirt road, up to a small house and a line of chickens. As a novice African-American surfer from Georgia, this looked more like the countryside of my hometown than the Vans Triple Crown of Surfing Awards ceremony.

Not until seeing Mikey February, South Africa’s arguably most stylish on a wave and athletic professional surfer and truthfully the only one I could immediately recognize, did I realize this was the right place and followed them up a dreamy hill which sat the ceremonies. Slowly we filed in.

As more people came, the more it felt like I was on the outside looking in on a different world I’m now a part of. My passion for surfing brought me there but the nuances are still foreign to me as I learn my way. It felt like I was there by fluke accident or some security guards’ negligence until I locked glances briefly with Chelsea Woody.

A Vans Global Surf Athlete since October 2021, 37-year-old Woody beamed. The sun glistened off her face as she walked up in all black. Her curls were beautifully free, playing with the wind. We both stood around a little unsure of what to do.

She told me this was her first time at an event like this and instantly the otherness I felt disappeared; someone I looked up to was sharing the same fish-out-of-water experience and yet we both belonged there. That one small moment sums up Woody’s mission in the world of Freesurfing.

“I saw a void in representation of women that looked like me and I didn’t like that,” Woody said referring to the movement Textured Waves she founded with sea-sters Danielle Black-Lyons and Martina Duran that caught the attention of Vans. “That’s also a passion project. I don’t do that because I want money from it, I don’t do that because I think there’s a way to make a career out of it. I do it because I know that it’s right.“

Textured Waves has dedicated itself to showcasing and encouraging BIPOC women in surfing since 2019, but Woody hasn’t always been a water-woman. Originally from a suburb in Seattle, Chelsea said she didn’t grow up near the coast and when she did visit the beach, she never immersed herself in the ocean.

“We would go to Ocean Shores, which was three hours from the suburb where I grew up. My family would go but we would just spend the day and dip our toes in the ocean.”

It wasn’t until her senior year of high school when she saw John Stockwell’s Blue Crush that a new world opened up but only for a fleeting moment.

“I saw Michelle Rodriguez and I thought ‘Oh wow! She kinda looks like me. That would be cool if I could do that’ but I never really thought about it after that. I went to Hawai’i with my sister … I did see surfing then and I wanted to try it and we watched for a long time but I just couldn’t get myself to get into the water.”

Though her dad taught her how to swim in her younger years all ideas of getting in the water were unheard of because she started chemically relaxing her hair, staving off any motivation to freely get into the water, which is a commonality between some other Black women.

Woody participated in traditional sports growing up, like basketball, track and soccer. After college she had goals of completing a triathlon. This began Woody’s journey to a deeper self-love.

“To train for that, I had to abandon all those ideas of wanting to keep my hair straight. I started to break down those issues I had with my hair.”

Surfing didn’t reappear in her life until she and her husband quit their jobs to travel in 2015. They booked a one-way ticket to Thailand where Woody wanted to see family, reconnect with her roots, and get in touch with nature. The pair traversed Southeast Asia with one backpack. Indonesia is where Woody learned to surf, but didn’t stay consistent. After a year and a half of traveling, they decided to come back to the States but the love of surfing stuck along.

“We were traveling to the coast every weekend to go surfing and that just wasn’t easy to live in Seattle and surf. It was becoming a timesuck,” Woody said, explaining her decision to move to Santa Cruz after going on a road trip up and down the West Coast.

Having close access to the beach was a game changer for Woody’s surfing and her sanity. Her stressful, demanding career as a nurse would’ve taken a toll on her mental health had it not been for surfing.

“It made me feel less stressed at work. It was an outlet. It wasn’t stressful for me to go out, I wasn’t trying to get so much better so quickly. It became an obsession of like ‘well, if I have free time, this is all I’m going to do.’ Obviously I wanted to get better, but it was just so fun and it wasn’t work. I was learning something new everyday and I enjoyed that challenge and I enjoyed that process of the ups and downs.”

Whenever she loses sight of why she started surfing in the first place, she reminds herself by going back to the basics.

“Get back on a foam board and have fun again. I’m not trying to be a competitive surfer. That’s not my path in life. It never has been. I’ve just always wanted to have fun and try and be the best that I can be and push myself in a healthy way that’s not unrealistic or too dangerous.”

Woody said surfing is her therapy; it helps her through the ups and downs of life. It’s also taught her a lot of lessons on how to deal with life and going where the wave takes you.

“If it knocks you off, just get back on and try again if you can.”

Surfers like Woody are a testament to the surge of Black surfers like me who have found solace, clarity and joy in the ocean. Though humble, she’s a beam of light for what’s possible for little Black and Brown girls everywhere that simply find joy in surfing.

“Many African-American women started surfing late,” she said when encouraging me about discovering surfing in my late 20s. “Even Andrea Kabwasa and Mary Mills, some of the first documented African-American female surfers started in their 30s. It’s a trend that I hope changes and it is changing … I hope the trend changes and that young Black girls start earlier and feel like they can [surf] and they don’t have to wait until they feel confident in themselves. They’ll already have that confidence at a younger age.”