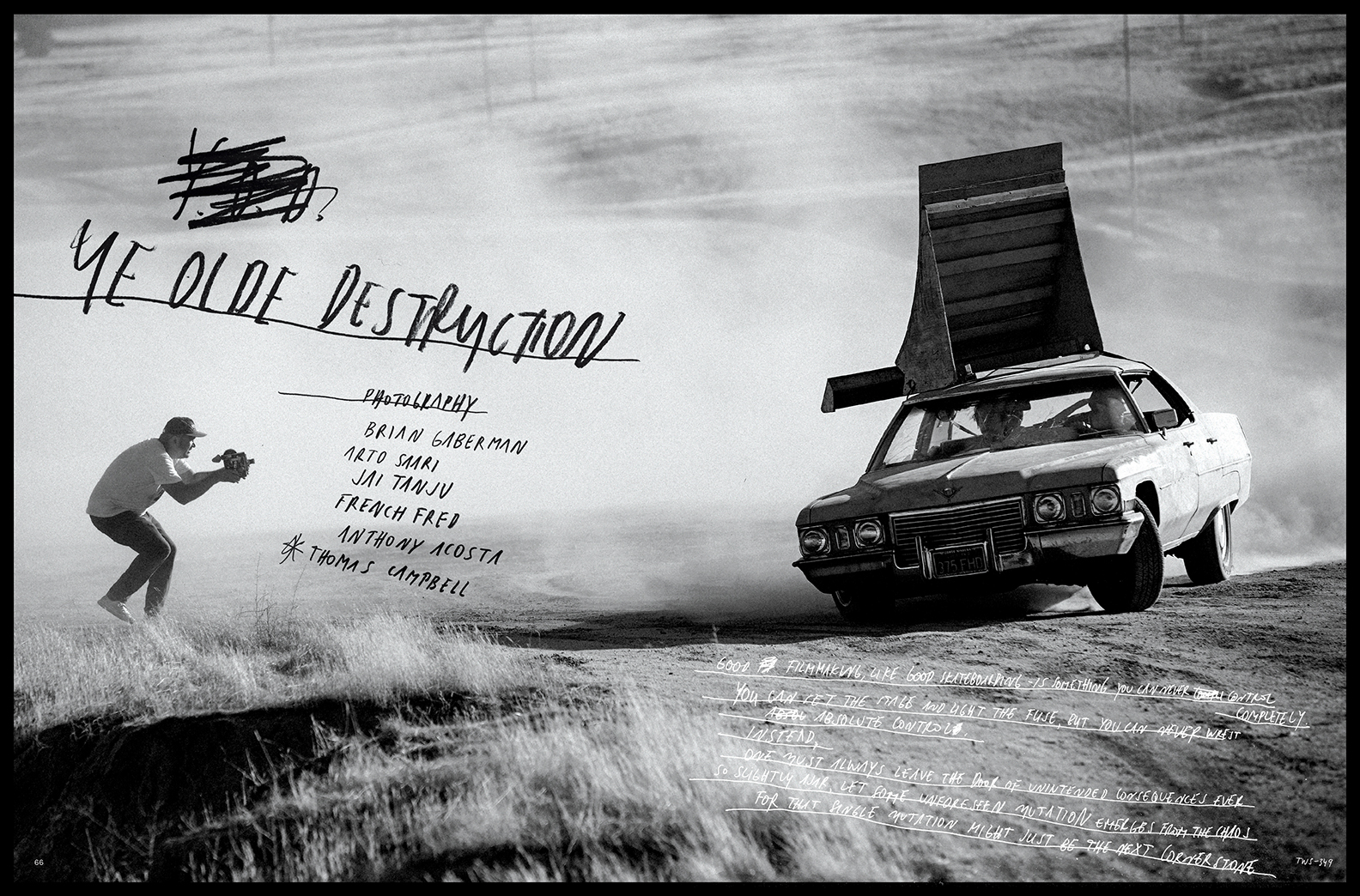 Thomas Campbell’s latest passion project, Ye Olde Destruction, just premiered on our site last week after touring around the world for more than a year. We caught up with Thomas to follow up on our original interview with him in 2018 and see how he pulled off his unique premieres and what he learned from it all. Dive in.

What was the spark to get you back into another skate project?
I was doing stuff with Element and still working within skateboarding here and there. But at the end of the day, when I was a kid, the way I looked at skateboarding was in the mindset of like Mark Gonzales, Dan Drehobl or Phil Shao, just people that looked at skating like, “What is there to skate? Let’s skate it.” That’s the school I came from, “Oh, there’s a ditch. Let’s skate it.” “Oh, there’s a pool. Let’s skate it.” It didn’t really matter. We skated everything. I think I just got turned off in the ’90s with the divisions that started taking place with tech dudes and pool dogs and whatever. It was just lame. I was always so bummed on it. That’s one of the reasons, honestly, I drifted away. I still kept skating, but I didn’t want to deal with that whole mess. Then fast forward some years, and I’m still observing skateboarding and people like Evan Smith, who don’t give a shit about anything, caught my eye. He’s just like, I’m going to wallie this then I’m going to Barley grind down this rail or whatever. There’s just not one iota of thought or doubt like, “this is lame.” He just thinks, “Is this fun or not?” Seeing other people like Raven or Grant, and I was just blown away by the skating that was happening. I think a lot of it is all the skateparks now. Cement skateparks give people decent style. When I was a kid there were probably only seven skateparks in all of America, and now there’s gotta be close to 3,000, right? I just really liked where skating was going. I don’t really care about contests or the Olympics. I just like the basic, ground-level ripping that’s been going on and how the division has died off and there’s so many different kinds of skaters now. I just got inspired. This is what I wanted to document.

How long have you worked on Ye Olde Destruction?
I think it was about seven years. I was going to have Javier Mendizabal be in it. I think I shot Javier’s first picture he ever had in a skateboard magazine in Transworld. Then we didn’t communicate for about 15 years, then we got connected back together and worked on the Quiksilver CUATRO SUEÑOS PEQUEÑOS with him in 2013. Then I had a kid and things just kind of changed and we didn’t get to link up. Then after that film, I raised the money to do this one. But it’s not like when you’re working for someone else and they tell you that you have an actual deadline. It was just me saying, “I have got to do this.” So it was all on my timeline.

“Things that you get to do that aren’t financially motivated feel really good when they work out.”

There’s a wide range of skaters in this film with different styles, from different eras, etc. what was it like working with so many personalities?
A lot of people in the movie are friends of mine from over the years. And there were a lot of people I used to mentor like Brian Gaberman. I used to be his photo editor. He went on to become a much better photographer than I ever was. He came on trips a lot. Jon Miner was there, French Fred too. There’s just a cool vibe about it and I think that most people realized that they were there because they wanted to be there, not because they had to be.

It being an independent film gets you in that mindset, right?
Yeah, that was super cool. There were loads of legends on these sessions and the younger guys were like, “Shit, I’m hanging out with Ray Barbee! Sick.” I think Suski told me when he got home from the last trip, “Dude, I was driving home and getting emotional because it was just a beautiful experience of a coming together of a community.” I thought that was cool for him to feel that way. I think we all felt that way. It was just a super good experience working on this film and I’m kind of in a minor depression because I’m not working on it anymore.

Were there skaters you wanted in it that couldn’t make it?
Yeah, I wanted Nora to be in it, but we just couldn’t get timing right. I really like her whole trip. I just really like the idea of funny, fucking skater people having fun. She’s one of them for sure. I love that. That’s what skating is all about to us. Having fun with your friends. Sure, it’s about the other parts but the best part of it to me is being with your friends. That’s what you really remember is being with your friends laughing your head off, and skateboarding is the conduit that made that happen.

“The further you get away from commodified industry, the more simple pleasures are to be had.”

There’s a big DIY aspect to the whole thing too. Why is that important to skateboarding?
You know, we actually filmed a lot of stuff in skateparks for this project, but in the end, it just felt like a different movie with those clips in there. With the park footage, it seemed like it would be more about the ripping instead of the experience. A lot of times you set out to make a movie and it turns out that the movie makes you change course and go another direction. So, I didn’t use the stuff from the skateparks and only used stuff from the DIYs. It just had a vibe and really cool feel being at DIYs and people coming together to make their own fun. That was a big part of the skateboard world I came from. Creating a situation to have more fun in an illegal sense. I think everything in this movie is more or less illegal, which I like because that’s what we are. We’re an outlaw culture and look at the world beyond the laws. I guess, I wanted the film to ruminate in that space. The black and white film takes the feeling to a dystopian world. The people we got to hang with and be part of their scene was rad. Especially the people in Bakersfield. They’re removed enough from the industry and just had killer vibes. I just feel like the further you get away from commodified industry, the more simple pleasures are to be had.

You toured this thing around the world for a year or more before just putting it online. No one does that these days. Explain that thought process and how you set that up.
Yeah, I think it was about a year. I think that’s another bonus with doing something not in a corporate setting. We were kind of able to move with it and see what was happening and adjust to it. The band No Age scored the film and in my dream scenario I would have wanted them to score the film live at the premieres, but you know, they have busy lives so that didn’t happen. But I really liked the idea of people playing live during the movie. Then I thought it would be cool to get a local band at the premiere venues to score it live so that it would be this big community thing and bring local excitement to the movie. The response was just amazing after doing that. I think it played over 50 times around the world from Argentina to Indonesia to Croatia, Canada, South America. A lot of the bands said it was one of the coolest performances they’d ever done. They had a purpose and applied their energy into something that was different. In general, the whole response was awesome. I didn’t foresee that originally. It just kind of happened naturally. We just kept getting requests from different parts of the world that they wanted to do it too. And no one was telling me how it has to be. Things that you get to do that aren’t financially motivated feel really good when they work out.

What did you learn from this whole process or would you have done anything different looking back?
I don’t know if there’s one big take away. I do feel like the older I get, the more stuff I do, all your experiences add to your general consciousness. I learned a whole lot and I can apply that going forward to everything. I got to really enjoy the time together with people that wanted to be present and make something cool. It’s pretty rad.

Below is the Ye Olde Destruction print article from our September 2018 issue along with another interview with Thomas. Click to enlarge the spreads to read them. 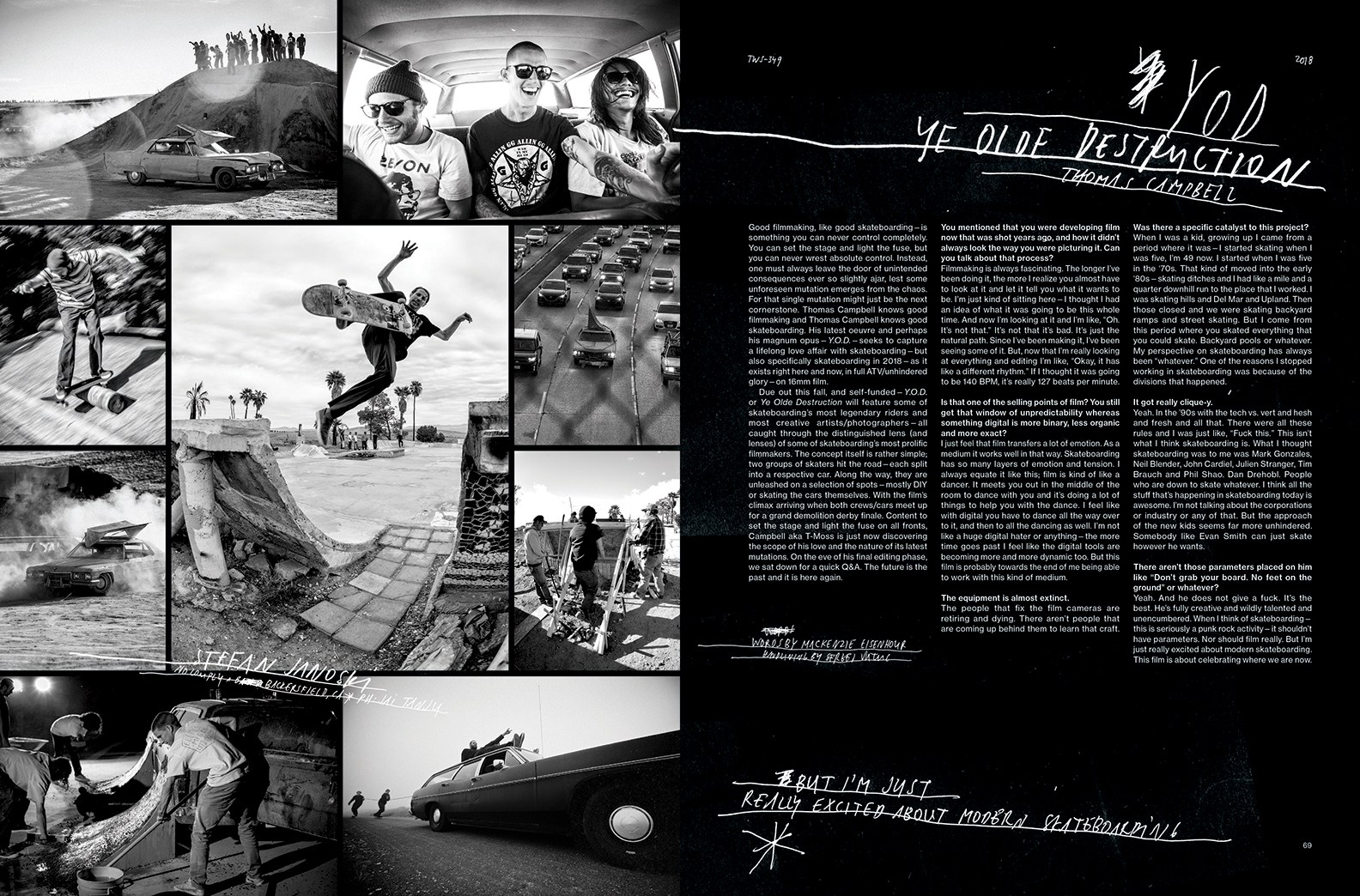 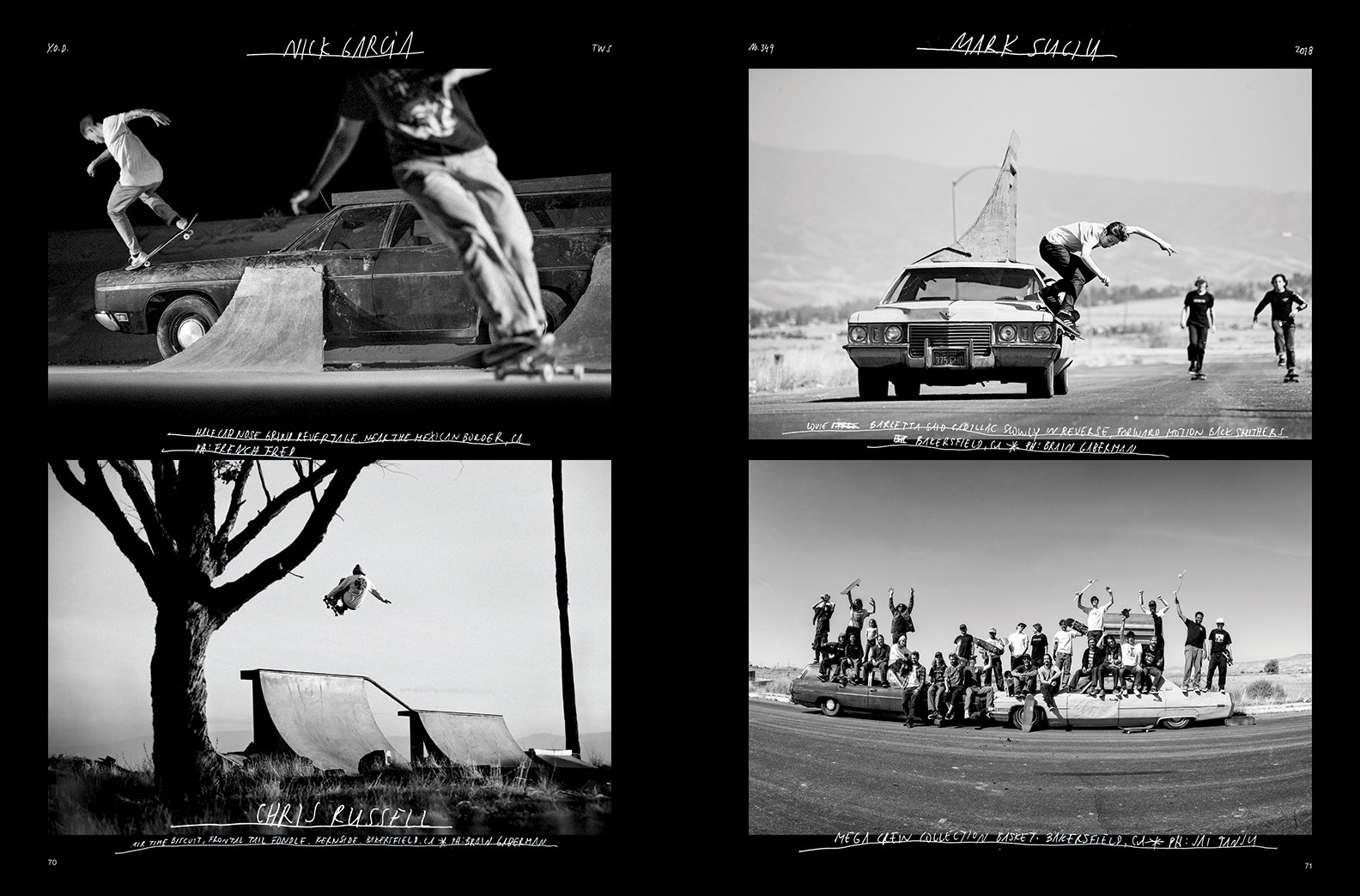 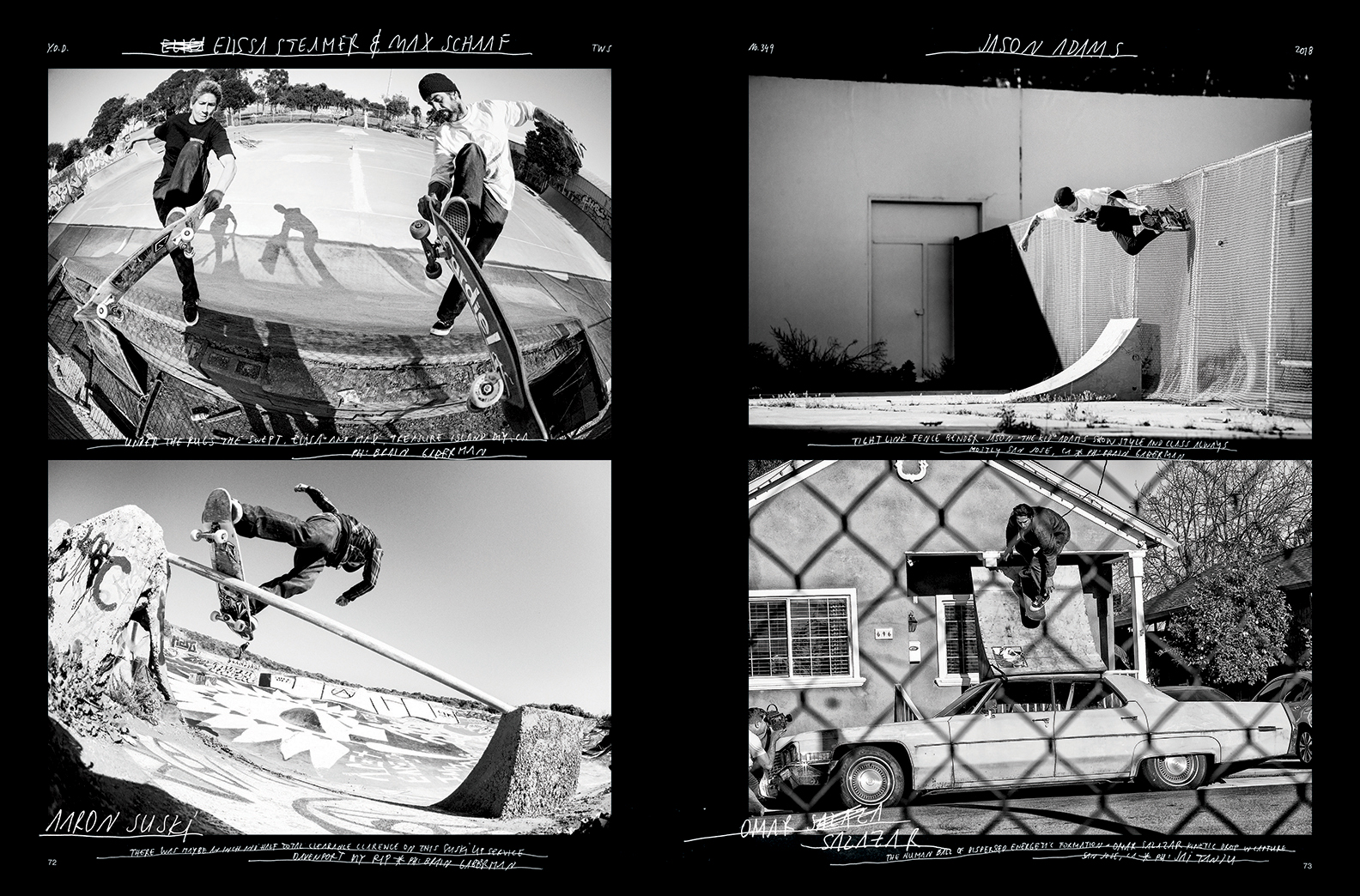 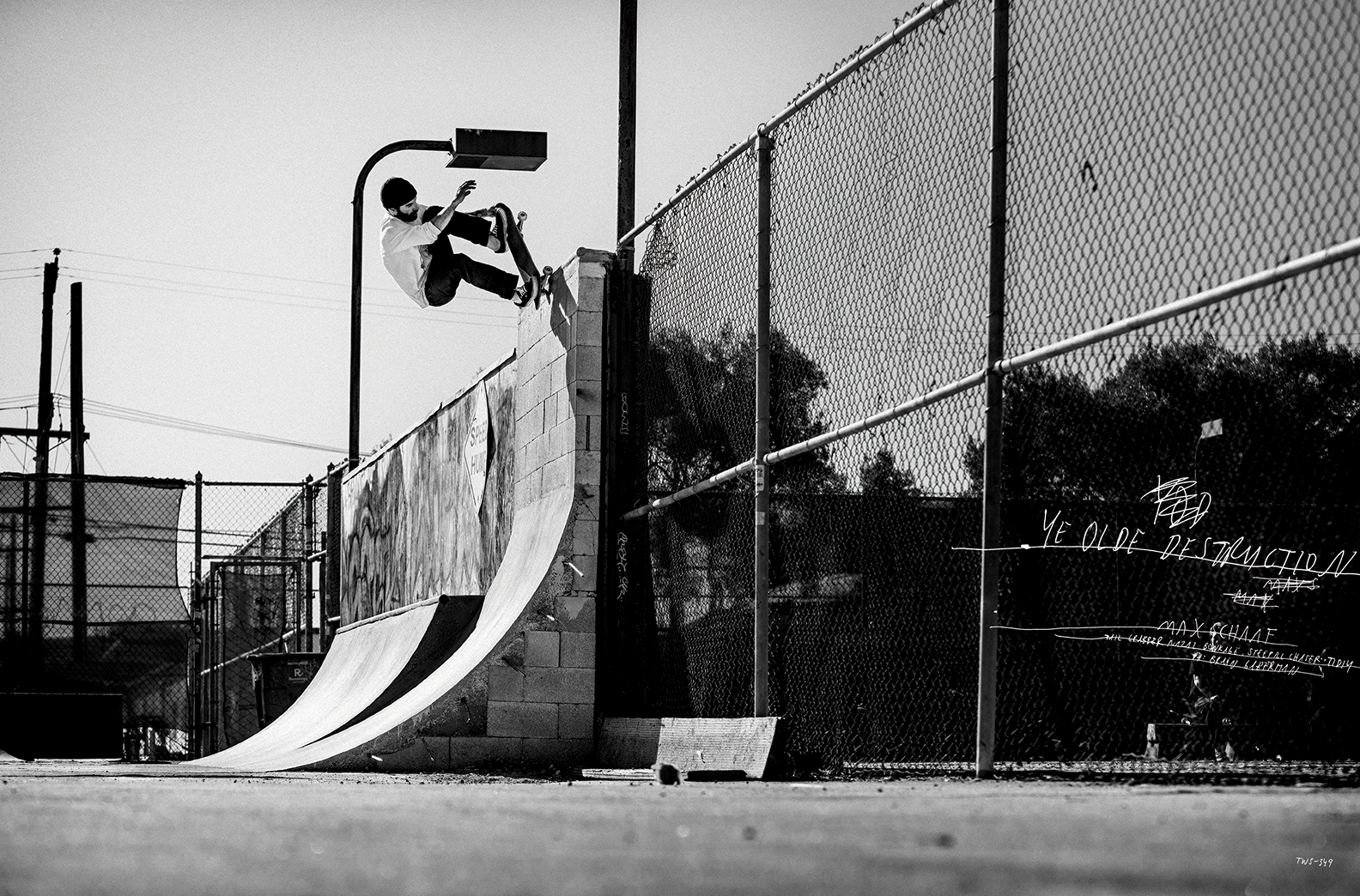 Click here to watch the film if you haven’t seen it or even if you have and watch again.