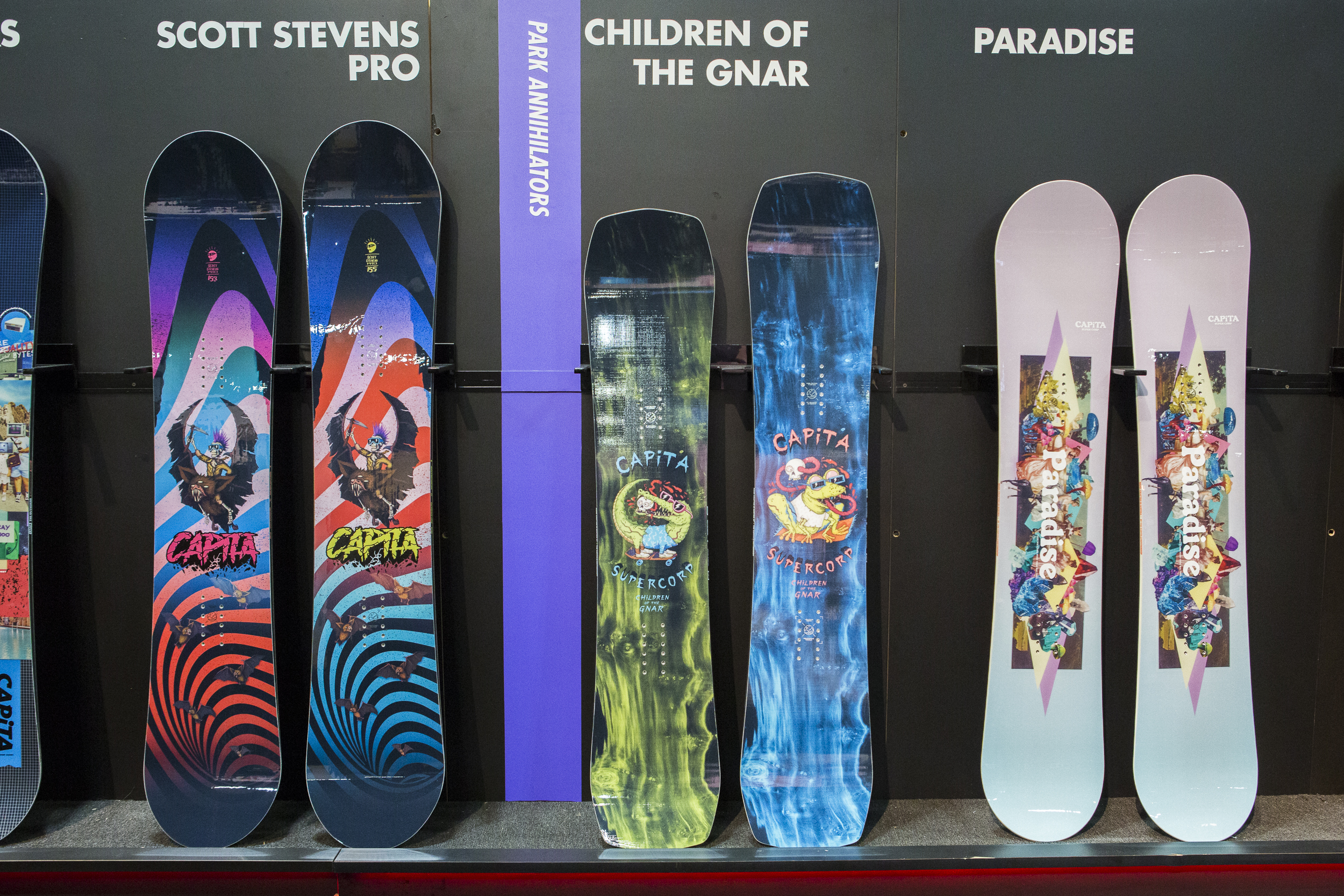 Handcrafting boards with 100% clean energy at the Energy Globe Award-winning Mothership facility, CAPiTA consistently pushes the envelope at the intersection of design, performance, and sustainability. Here’s a preview of their latest and greatest. Get hyped!

With a shape that turns on a dime, this board is made to jib, bonk, slide, shred, ride, slap and pop off of anything. Known for a damp feel and durable ride, the Scott Stevens Pro is a coveted board for creative riders looking for a more traditional twin tip shape in an advanced construction. Despite an already time tested and proven lay-up, Mr. Sleepy requested even more snap and ollie power in this year’s model. Of course, we delivered. For 2020, the new technical elements feature a recalibrated in-laid cork and wood core configuration alongside Technora™ ˜ Flax Struts to increase overall energy output.

Often imitated but never duplicated, Scott Steven’s riding and personal style are without compare. As a master innovator and industry leader in new tricks, he has set himself apart in the snowboarding game. This extremely durable, versatile, twin-tip park destroyer is what Scott uses to get wild. 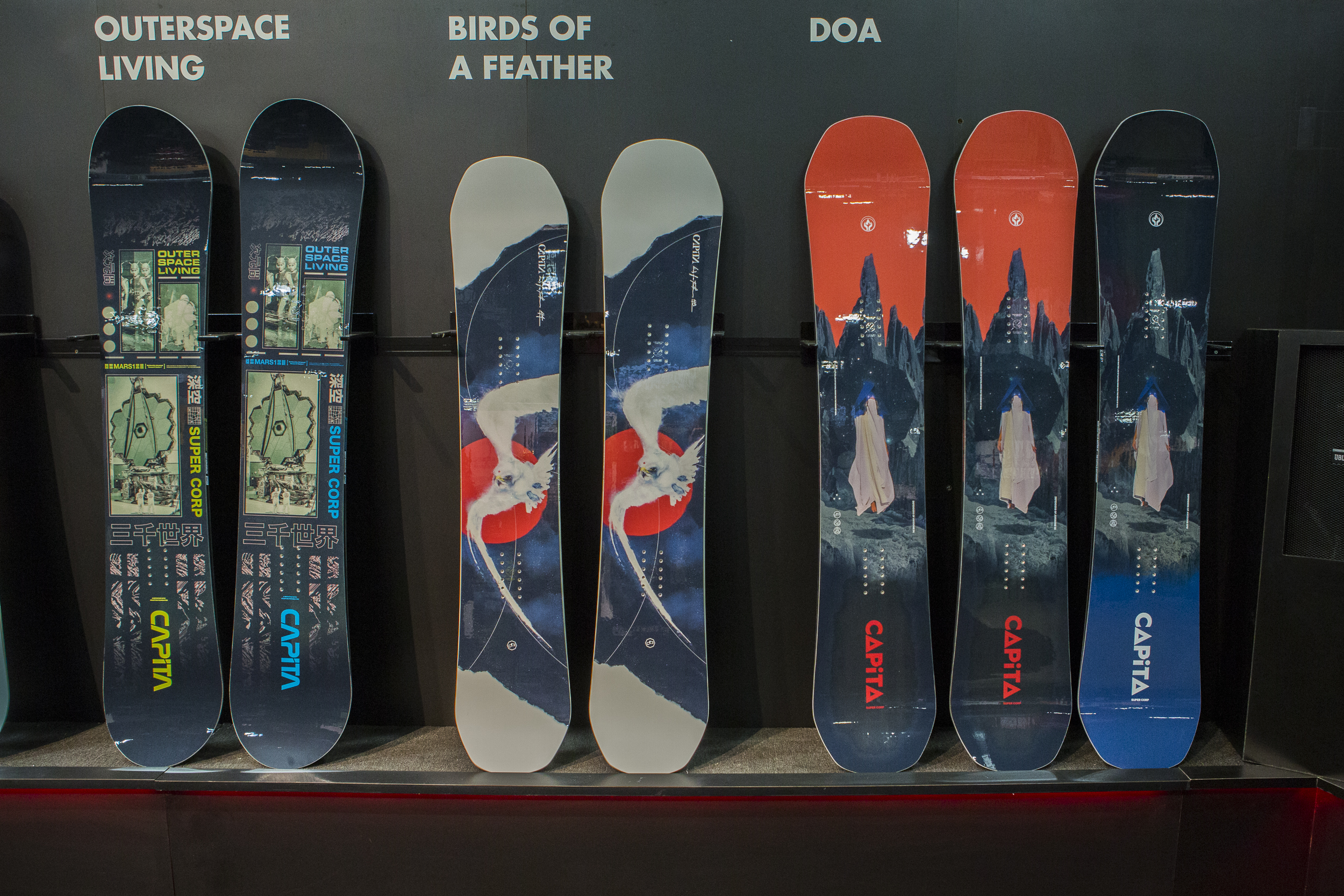 Birds of a Feather

Women’s / Blended Radial / True Twin
Sizes: 140, 142, 144, 146, 148, 150, 152, 154
Rider Type: Resort and park
Flex: 5
Camber: Resort V1 Profile
Our Resort V1 Profile boards take full advantage of the benefits of traditional camber, zero camber, and reverse camber. This next generation design allows you to get the pop and response of a cambered board with all the predictability and easy turn initiation of zero camber or reverse camber shapes.

A technical dead ringer of the best-selling D.O.A. series, the Birds of a Feather offers all the performance of one of the most sought-after snowboards in the world replicated into flex patterns and geometric sizing to meet women’s riding requests. This snowboard is so damn fun that the do-anything, go-anywhere Birds of a Feather is ready to change your riding forever.

With a medium flex that’s easy to turn and an elongated effective edge ready to carve up the slopes, this hybrid camber, all-terrain destroyer has inspired countless knockoffs chasing its success. Such emulation comes with the territory given that the Birds of a Feather has won every major design award in the industry.

With an all new Dual Blaster Ashpop™ Core and eight sizes to choose from, the Birds of a Feather is suitable for a wide range of riders and is ready to take your snowboarding to new heights.

The Defenders of Awesome series has a big reputation and these boards back it up. As winners of the most coveted design award in snowboarding for an unprecedented seven years in a row, this model became our #° selling snowboard and one of the most sought-after snowboards in the world. The D.O.A. features a next-generation hybrid camber design that delivers the pop and response of a cambered board with the predictability of reverse camber and is now available in an extended range of wide sizes. With construction technology like an upgraded Dual Blaster Ashpop™ Core, Fortress™ Kevlar Bound Sidewalls and a high-speed Quantum Drive™ base advancing these boards beyond their modest retail price, the D.O.A. series stands proud as the ultimate go anywhere, do anything freestyle deck. 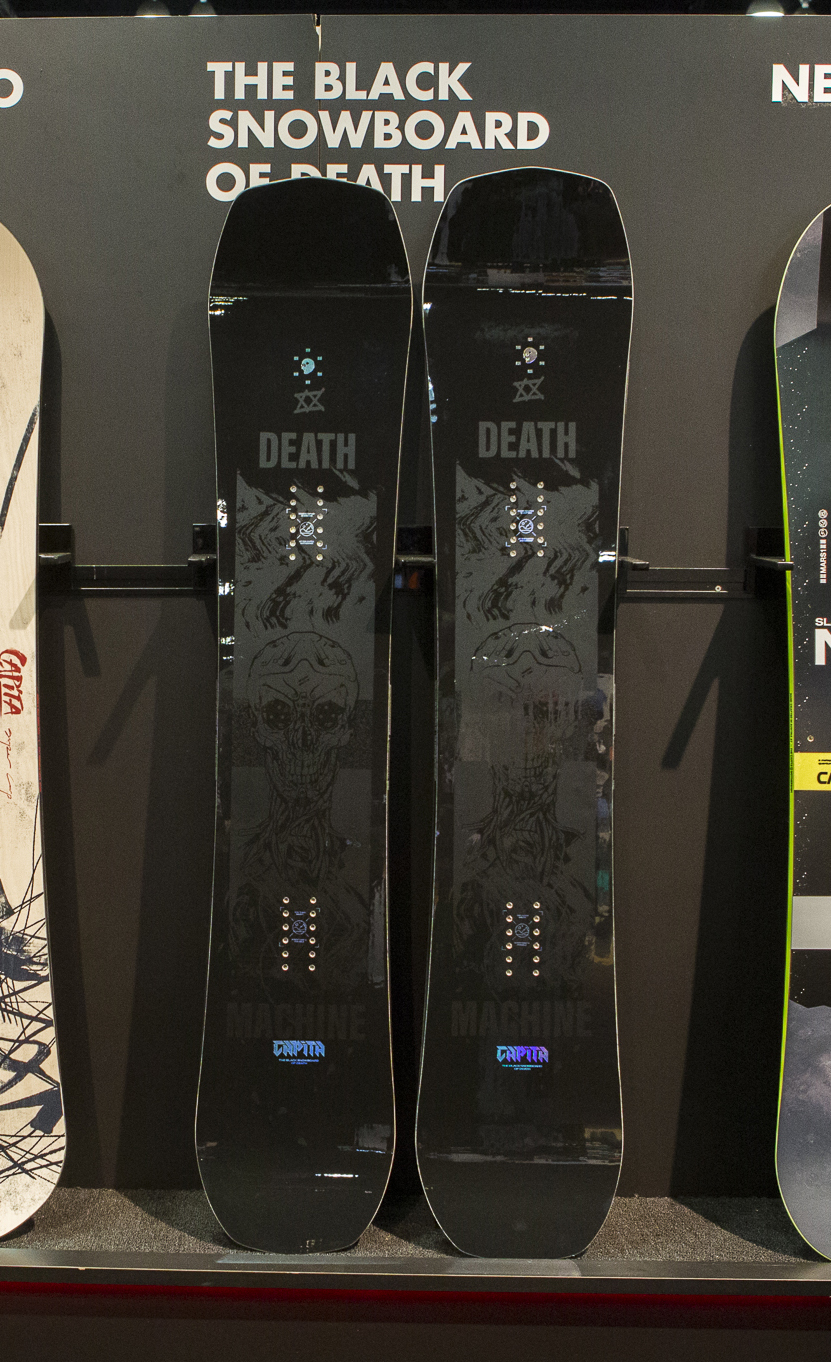 The Black Snowboard of Death

Men’s / Progressive / Directional / 0.5” Set Back
Sizes: 156, 159, 162, 161W, 165W, 169W
Rider Type: All-mountain and powder
Flex: 6.5
Camber: Alpine V1 Profile
The Alpine V1 Profile design features mid-body camber with a flat tail and a reverse cambered nose. This allows for tons of pop and stability on hard pack while increasing float and landing power, improving the rider’s performance in deep snow. The camber runs longer in the tail—providing extra power for the ascent or for larger riders drawn to a dedicated wide series.

Behold The 20th Anniversary Black Snowboard of Death. TWENTY years, wow. It feels just like yesterday we die-cut the OG Merchant of Death Skull into a progressive, directional all-black silhouette and left the tracks on this runaway train called CAPiTA.

With legendary status as an all-terrain slayer and too many accolades to name, The Black Snowboard of Death has been continually morphed and modified. The only element that has remained the same over the years is the name itself. For 2020, this CAPiTA classic has been completely reshaped within its anytime, anyplace, all-mountain design mantra, which made it famous from the beginning.

This adaptation features a slightly wider frame with tighter side cut arcs and Death Grip™, a reverse sidecut arc in the midsection that enables the shape to whip into quick turns. With a well-balanced directional shape and high-powered construction, this custom-de-signed rocket ship allows for incredible control—making you a better snowboarder in variable terrain and changing conditions.