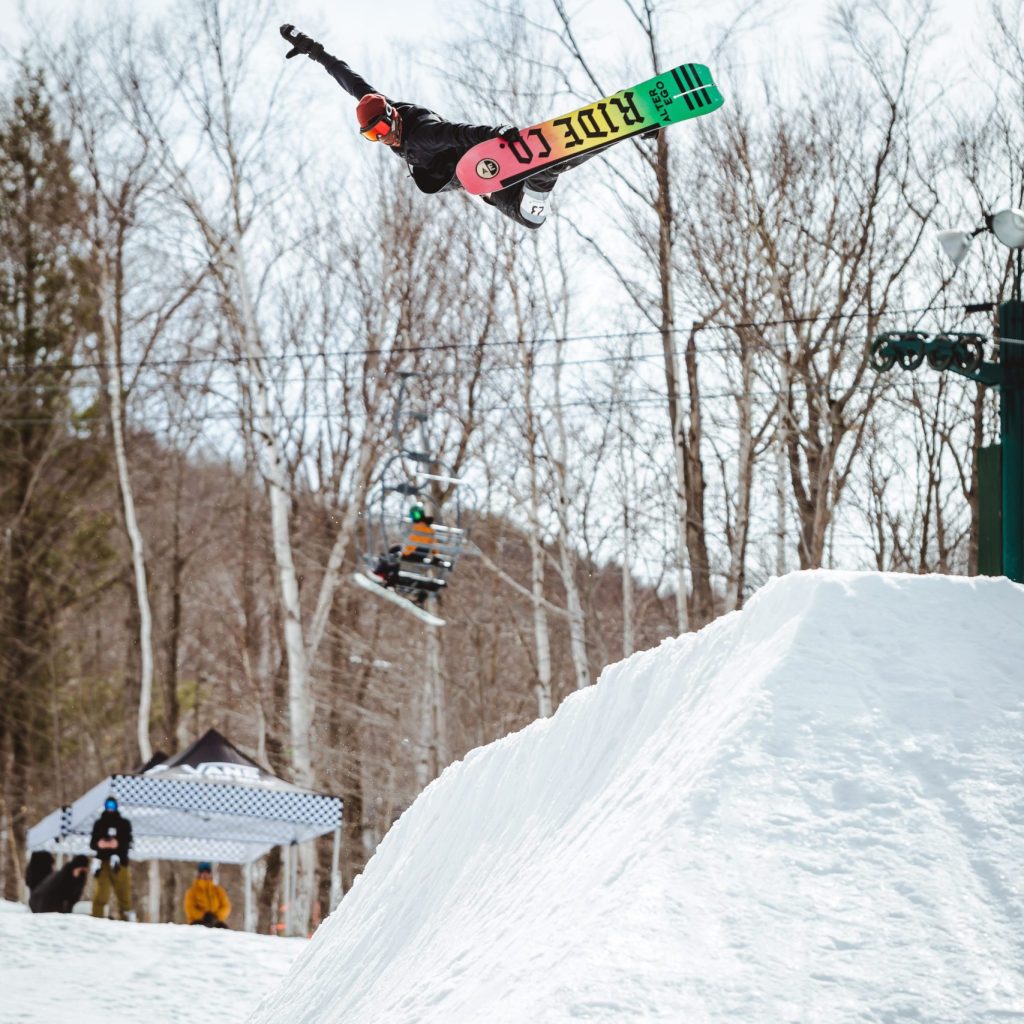 I want to begin by saying that I have lived a very privileged life. I was adopted from Florida by white parents and have spent my entire life living in Vermont and New Hampshire. From an early age I was given every opportunity imaginable: we went on vacations every summer and winter, I was able to get an undergrad and graduate degree, I never knew what it was like to want for anything and have never had to fight every day to live a “normal” life. I went to Waterville Valley Academy (actually it was at Waterville Academy where my current social media name–@thebrownfriend–was coined and it’s a name that I’ve loved and owned ever since) to chase my snowboard dreams and was able to travel all over the country competing in snowboard contests, getting gear as a sponsored rider while living an absolutely incredible life.

While I played other sports growing up, it was through snowboarding where I was able to find a community where my skin color didn’t matter. I’d had a few incidents with racism on the soccer field as a teenager, which in hindsight is actually pretty ironic since the number of black soccer players around the world is probably about ten times higher than the number of people who snowboard. I’d grown up in the winter sports world, so I knew how little diversity there was on the mountain. Part of me was expecting my color to be an issue at some point, but it never was.

I was drawn to snowboarding for so many different reasons, but the culture is what really lured me in. I loved everything about it: waiting all summer to buy the videos, being stoked each month when the newest magazine would show up at my door, and since I lived on the East Coast I was able to go to the US Open, World Quarters and X Games to watch all my heroes ride live. I mean, at how many other sporting events can you sneak through the woods to the bottom of the course to get autographs from Keir Dillon, Natasha Zurich, Ross Powers and Todd Richards, then get to just hang out and watch the rest of the contest with them?

It was through our snowboard community where I’ve had some of my most meaningful interactions with other snowboarders. I remember filling my room with pages torn from magazines of Russel Winfield, Ahmon Stamps, and Ben Hinkley (also anything shot by Stan Evans always had a place on my wall). It was through snowboard videos where I fell in love with A Tribe Called Quest, Hieroglyphics, Swollen Members, Gangstarr and MYG. I remember meeting and sharing emails with Keir Dillon (and on more than one occasion signing his name when someone thought I was him at a US Open—sorry, Keir!) As an adult, I remember tagging along with Pat Moore to High Cascade with the Forum guys and spent an amazing week riding with Stevie Bell, shredding all day and spending our nights playing horseshoes at Charlie’s. And finally, I remember being lucky enough to go to Baldface during Ultra Natural where I spent one of the best nights at the bar I’ve ever had, staying up late, drinking car bombs and talking about life with Sal Masekela. All those events had nothing to do with our skin color; they were moments where I was able to further fall in love with snowboard culture and further realize that there were other people who looked like me who also fell in love with snowboarding.

Over the past few weeks racial tensions in America have been at an all-time high and it has caused me to look both forward and backward. This issue of racial inequality goes beyond partisan politics; it’s unfortunately been an institution that has been around since the founding of America. I’d be lying if I told you that I’m not scared about what’s happening around my country; no adult should have to worry that they will be a target because of their skin color and no child should have to live in fear because they look different. But I have been overwhelmed with the response from members of my snowboard family, speaking out on a subject that is so very difficult and uncomfortable to talk about. As a snowboard community we can use our voices to protect and speak out for those that are judged by the things that make us different. We can start a positive conversation about those differences; because it is those differences that make us unique, make us American, make us human.

While I most certainly don’t have all the answers, what I do know is that through all of this, I know that snowboarding has and will always be there, but now it may finally look a little different and I have a few suggestions. For companies: Look around for those snowboarders of color, because the next Gabby Maiden or Zeb Powell is out there and they are hungry, talented, and powerful. For the snowboard community: Keep using your voice to speak up and speak out against any system that values one group over another. As snowboarders we are powerful and people will listen. Also ask questions; I’ve never turned someone down who has asked me what it’s like being a black snowboarder of what it has been like growing up as the minority. For all of us: Buy magazines and movies, support good brands who are doing great things, buy your gear from your local snowboard shop and keep on speaking out against those that are trying to divide us.

Tyler Davis lives in New Hampshire where he can be found ripping turns all winter at Gunstock, Waterville, and Loon. He grew up riding and competing alongside Pat Moore, Chas Guldemond, Danny Garrity, and more–honing a talent that transcends the icy slopes of New England and has brought him to resorts all over the world. As a writer, he has contributed to SNOWBOARDER Magazine and Red Bull Snowboarding, among others, and was the Copy Editor at Snowboard Magazine until 2016. Since 2014, he has hosted The Tyler Davis Hip Jam at Gunstock Mountain Resort, an annual, old school-style contest that brings together the multi-generational snowboard community in New Hampshire and celebrates the East Coast scene at the resort Tyler started riding. Committed to the welfare of others both on and off hill, Tyler has been a high school English teacher for over a decade. His method continues to be a textbook example of style, both in the White Mountains and far beyond.

About Elevating Voices
Penned by riders, creators, industry leaders, and more, Elevating Voices is a series of opinion pieces written by Black snowboarders for whom riding has shaped their lives; an opportunity for the greater snowboarding community to listen to individuals speak about their experiences with race, racism, accessibility, and inclusion within our sport. In an effort to enhance the dialogue of equality and inclusion in snowboarding, SNOWBOARDER Magazine is committed to providing a platform for BIPOC to share their point of view as riders.