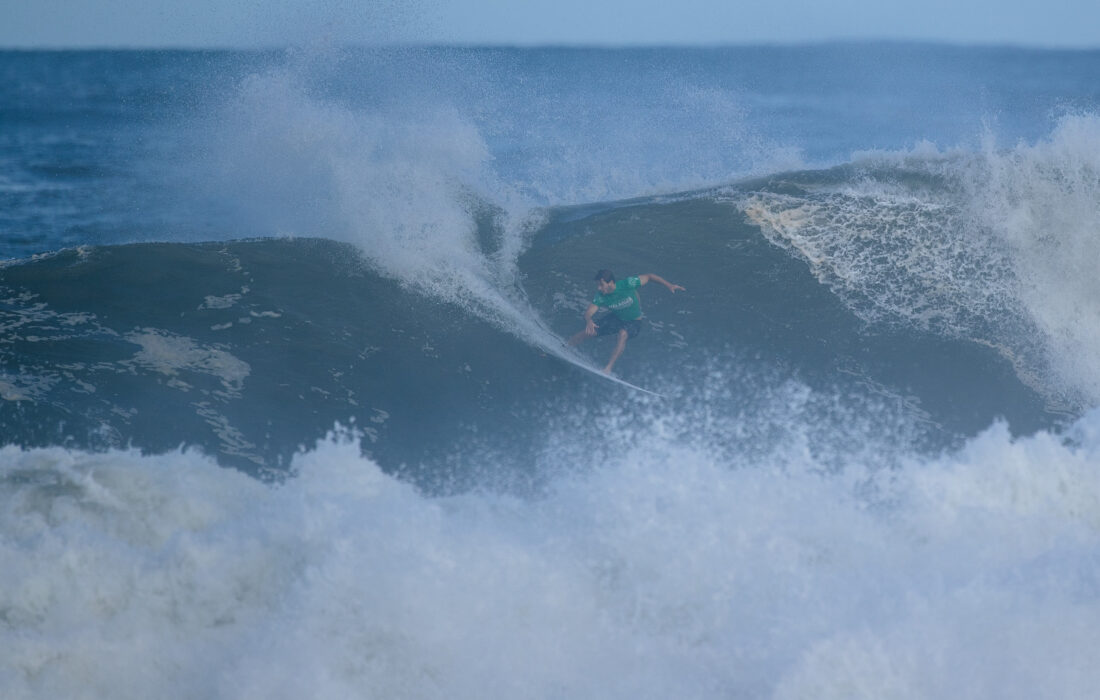 “I’m feeling good, really good and it’s just so much fun being here and competing again,” said Florence. “After those injuries the last few years, it just feels good to be here and I just want to say thanks to my wife, my family, my whole team, and everyone who’s there supporting me. It’s been huge going through these last couple years and to be here winning again is awesome.”

An early start from Pupo got the attention of eventual winner Florence as the North Shore, Oahu surfer unleashed an array of his signature power and progression on a wave at the midway point of the Final for a perfect 10 that had the crowd erupting in cheers and applause. The 29-year-old, 2X WSL Champion, wasn’t to be stopped – holding the highest single-wave score and heat total throughout the event – and placing all of the remaining finalists in a combination situation.

This marked Robinson’s first-ever Finals appearance on the hallowed grounds of Haleiwa and he surged through the competition on his way to a runner-up finish. The 2021 CT Rookie will return to compete against the world’s best with renewed vigor following dominant performances at Haleiwa, including an excellent 16.40 heat total in the Round of 64 and an 8.33 wave in the Semifinals.

“That was a good run and it was funny because John (John Florence) and I were in a paddle battle before he just turned and went on a wave,” said Robinson. “I think that put him in a good rhythm with those two waves and I turned around thinking what just happened. But, it was such a fun event and a good tune-up for next year. It’s funny, it’s been two years since I’ve qualified now and everything here feels so different but at the same time it’s the same beautiful place and I’m just excited to be back here.”

A third-place for Igarashi kept him atop the Challenger Series rankings to close the 2021 season as Pupo’s fourth-place notched a career-best in a major WSL event.

Championship Tour hopeful Alyssa Spencer (USA) debuted in dominant fashion to steal the show from one of surfing’s greatest, reigning 5X WSL Champion Carissa Moore (HAW), who also advanced with a second place finish in the heat. Spencer’s top form in 2021 remains undeniable with two victories to her name on the Qualifying Series (QS) and the San Diego, California competitor looks to keep that momentum alive.

“It felt so good to get that heat out of the way after we’ve been waiting around for a lot of days to have this happen,” Spencer said. “There’s been a lot of anticipation and a lot of nerves, but I was just happy to find a couple opportunities out there, and it was so cool being in a heat with Carissa. This is a really big event for me and probably the best year of my life competition-wise, and just really enjoying where I’m at right now.”

Fellow CT qualification threat Luana Silva (HAW) sits on the cusp of making her dreams come true and secured her spot into the Quarterfinals with a brilliant showing. The 17-year-old’s forehand laid the foundation for a 7.17 to take the lead and she never looked back. Silva is also joined by alternate and North Shore’s own up-and-coming talent Pua Desoto after getting into the event following Sage Erickson’s (USA) withdrawal.

“It was super fun out there and just to surf with three other girls out at Haleiwa is pretty amazing,” said Silva. “I was riding a small step up, a 5’11, with my normal board being a 5’9. My home breaks are more up the coast like Sunset, but I’ll usually come down here if it’s too big everywhere else.”

Adding to the day’s immaculate showings, an Australian duo of Molly Picklum and India Robinson both notched decisive victories over World No. 2 Tatiana Weston-Webb (BRA), who was eliminated from competition, and CT veteran Lakey Peterson (USA), who also advanced. Picklum, 18, is also on the hunt for a big result to secure her CT spot along with Robinson.

But, it was Haleiwa’s own Bettylou Sakura Johnson who laid waste to her home lineup with another jaw-dropping performance – a 16.23 heat total. Johnson’s awareness in the shifting lineup allowed her to find a 7.40 before immediately, under fourth priority, unleashing her powerful forehand multiple times for an 8.83 to best former CT competitor Coco Ho (HAW), who was eliminated from competition, along with CT competitor Caroline Marks (USA), by Amuro Tsuzuki (JPN).

“The waves were really good today so I think anyone could’ve had a good heat,” said Sakura Johnson. “(I just have) excitement for tomorrow. I’m taking it step-by-step and I’m going to keep my confidence and hope for the best.”