The Stoke Runs Hot in the Deep Cold 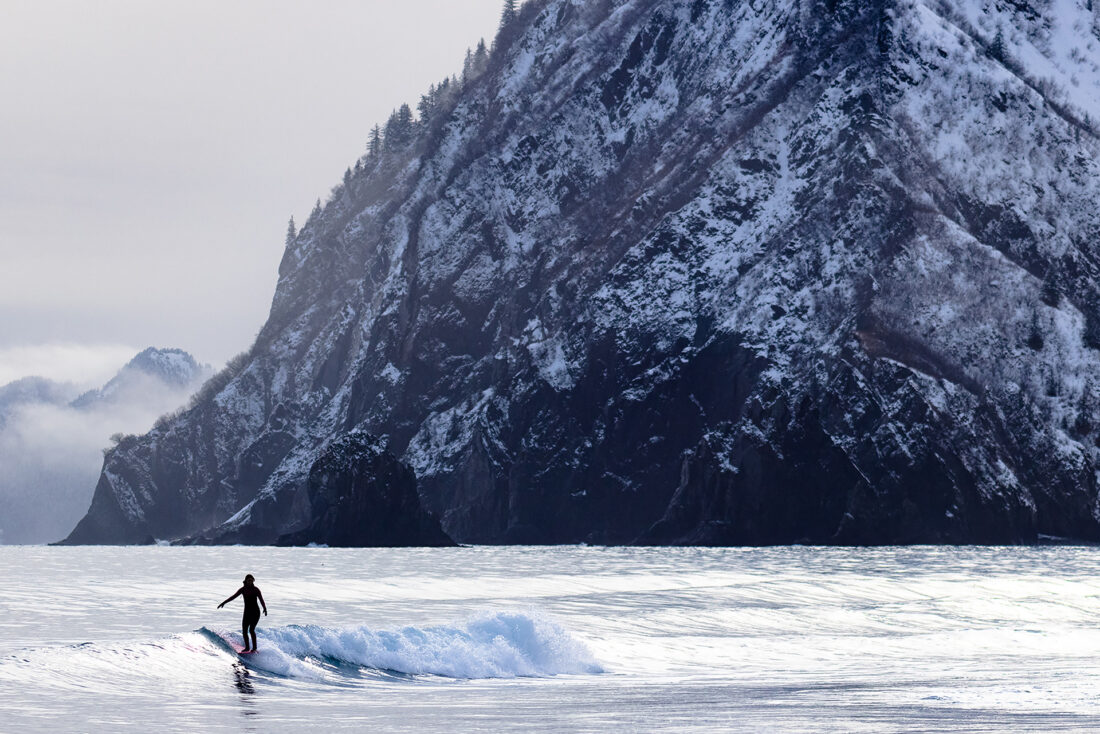 Kirra: Close your eyes and try to imagine Alaska in February. The most beautiful landscape full of bright white glistening mountains and ice blue glaciers that take your breath away. Snowflakes landing on your lashes and the chill in the air penetrating deep into your bones. Now imagine being there but on a fishing boat. Waves and wind whipping at the sides. Splashing and rocking you while in search of perfect waves. No other humans in sight and in the middle of nowhere out at sea in Alaska in hopes of pioneering new waves. That’s where our story begins…

Anna: We are definitely tougher than we may have thought, but Alaskans are still tougher. During a month where most boats are frozen to their docks and crew members flock to warmer climates, we were trying, accompanied by some incredible stroke of luck, to find surf along an often bypassed stretch of Alaskan coastline. Abiding by Captain Mike’s motto “When the stoke is hot, you can endure a lot” we climbed aboard eager for a new adventure.

Captain Mike was kind enough to offer to have us onboard “The Milo”, a 58 ft fishing vessel that’s been converted for surf exploration. He needed to get the boat from Homer to Seward, where his coldwater surf trips begin in spring. Mike McCune acquired the boat after selling his house and business to reclaim his passions for surf exploration. Equipped with all-time crew members, he’s responsible for discovering a majority of the distant surf breaks of America’s most northern state.

Sarah and I headed over first to get used to the cold. We had a week of snowboarding and adjusting to the climate change. Never surfing in anything thicker than a 2mm wetsuit, I was beyond nervous. Anna, the cold water connoisseur met us in Anchorage as we boarded a tiny plane to Homer.

A: Not only was this to be our Alaska Surf Guide’s second ever trip in the dead of winter, but we also happened to be a group of three girls coming straight from Hawaii. A decent amount can go wrong in the wintertime northern seas, as anyone who’s watched The Deadliest Catch can attest to. You have to flex your common sense muscles when you’re miles out at sea in oceans that could kill you in minutes. Upon boarding and getting a tour of the boat, we were instructed to throw up inside or on the deck if we became sick. The risk of going overboard is taken seriously.

K: The excitement of seeing constantly perfect peeling right and left point breaks popping up at every turn made the amount of rubber we had to put on less daunting. We would scale down into the engine room and sway and nearly fall over as we managed to get into our 7mm wetsuits, wool socks with 7mm booties and gloves. We then proceeded to wipe a thick layer of vaseline all over our faces and pull on our hoods. I genuinely did not think I’d be able to surf. I felt like I was sinking and my board no longer had enough volume for all my extra weight. Anna was in her element so I just followed along hoping to gain some cold water wisdom. After nearly two waves and feeling as if my body didn’t belong to me, I soon realized the hood had to go. The boat captain and crew looked at me like I was crazy, but, being from Hawaii and never wearing a wetsuit, my equilibrium and balance disappeared when putting on a hood. I certainly will never take for granted being able to hear your surroundings. No words can describe the feeling of being absolutely in the middle of nowhere with jagged snow capped mountains in front of you. Huge sea lions swimming beneath you and sharing multiple perfect left point breaks with just a few friends. Bobbing around on your log next to icebergs while being frozen to the core, but so incredibly happy and in awe of Mother Nature that your heart instantly warms you up.

A: The first rough crossing came in the evening of our third night. After the sun had set, we could no longer keep our eyes fixed on the horizon to stabilize the rocking that throws your equilibrium into a tailspin. That first crossing laid us all up in the cabin clutching to handrails, trying not to think about puking or all the comforts of solid ground. By the third crossing we’d all found our spots to get through it. Kirra under her pillow fort on the couch, Sarah butted up to the heating vent, and me at the kitchen table watching the pots and pans sway.

K: I genuinely never have felt so scared in my life. I definitely had the thought that if I died out here I wouldn’t even be able to call my mom and tell her I loved her. But, those fears and rough crossings quickly dissipated the moment we would see the next untouched wave. The winds were gentle but the ice cream headaches were still real as we surfed multiple 4 hour windows before finally returning to the boat to thaw out.

A: Recalibrating to life on land was jarring after our time at sea. The bathroom of our snowed-in motel swayed around us with mal de debarquement syndrome leaving us feeling like we were still on The Milo Surf Boat. Thinking back on the trip, it seems like it wasn’t real. An adventure beyond our wildest imagination and pushing us past our limits in the most euphoric way.