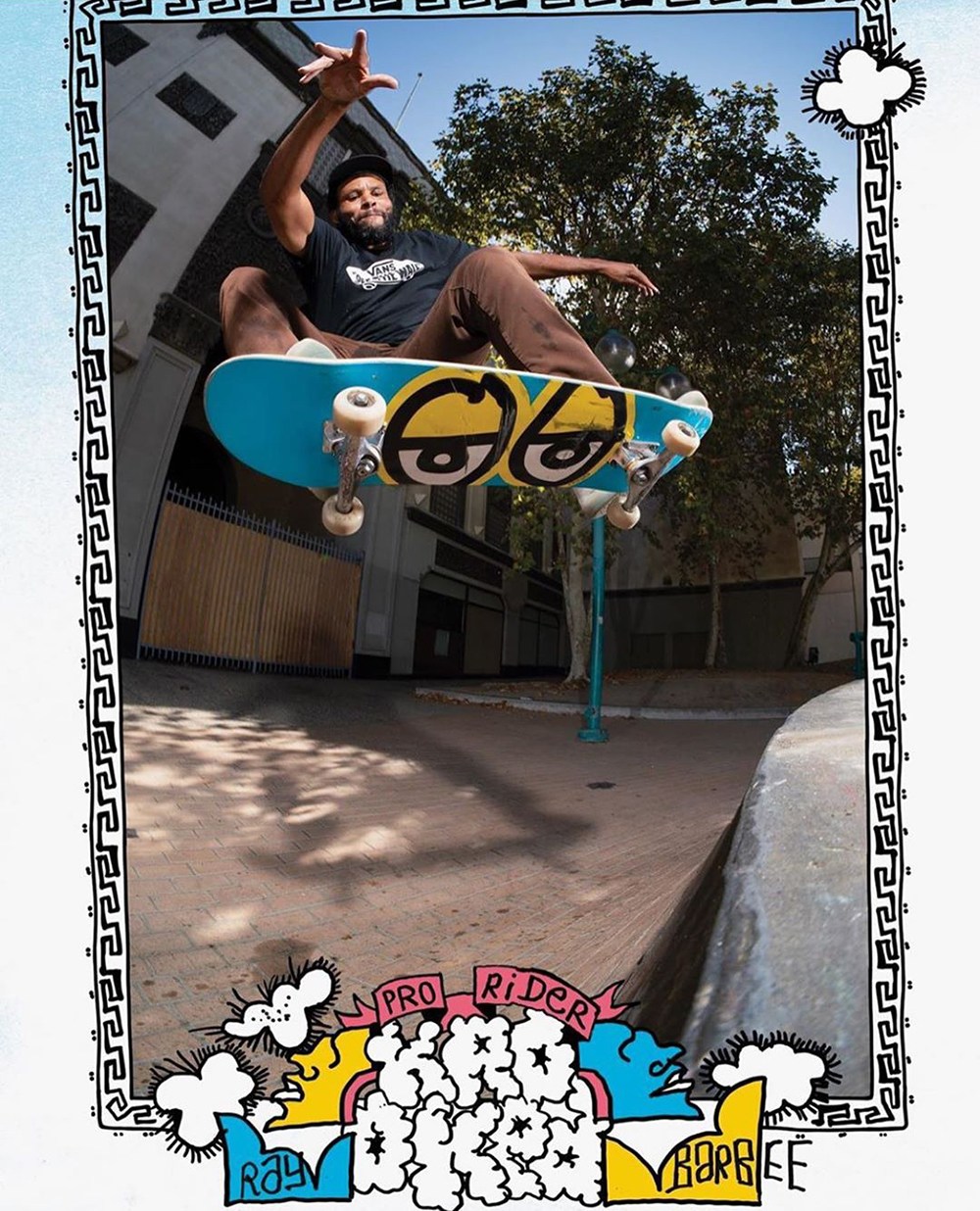 In a world gone mad, the news of Ray Barbee getting on Krooked skateboards last month was just the right thing we all needed to hear that could help get us through this insane year, and give us a little hope for the future. There was definitely a collective, “YES!” when we all saw the official announcement because who doesn’t love Ray Barbee? So since we were feeling all good about this move, we knew Ray had to be feeling even better about it and wanted to get his take on the whole deal. Dive in.

Congrats on getting on Krooked. How does it feel?
I’m so grateful to be part of something with friends, you know, like longtime friends too. I’m thankful for Element for supporting me and allowing me to chase dreams for many years, but it’s really nice to be part of something where we all speak the same language. I don’t have to translate anything. We can just talk about whether or not we agree on ideas without having to explain or justify the idea.
Also, it was super encouraging getting the feedback on Instagram and texts from friends congratulating me on being part of Krooked, because I’d never realized that they were rooting for me all along, but not necessarily rooting for Element. You don’t really realize that’s how it’s functioning until you hear people talking like they’re so happy that I got out of jail or something [laughs]. It was just a sense of, “We felt bad that you had to be over there.” So that was really interesting for me to experience that. It showed me that skateboarders are still skateboarders, man, and still dig skateboard brands run by skateboarders.

How did it all come about? Did Gonz call you and ask out of the blue?
No, no. I went begging to those dudes [laughs]! Element got bought out with new investors and they came in and changed up everything. The skate program cost a lot of their budget so they needed to do budget cuts and it didn’t make sense to be over there anymore. So, when I left Element, I just started thinking of what program would it be fun to be part of. Having a long relationship with Tommy, Mark, and Thiebaud, I just thought it would be rad if those dudes thought it made sense for me to be over there at Krooked. And I’m so grateful that they did!
I remember, I called Tommy and told him that I had left Element and said, “It would be so fun to do stuff with you guys. I just want to do stuff with friends.” And Tommy said, “That’d be rad but it’s not up to me. But let me reach out to Mark.” Then a couple of hours later, he texted me back and said Mark was into it! And that was still just part of the process because they still needed to talk to Bram (Krooked TM) and the team. And right away I was thinking I dig this because you guys are a family and it’s about everybody having a say. It’s not being dictated by some dude in charge. It’s about what the team cares about. Much respect for that and I’m so stoked that they were down for the old man to be a part of it.

You mentioned something about this to me almost a year ago when we filmed your Skater’s Favorite Skater. What took so long to officially announce it?
It’s been a slow process because, yeah, I actually got on this time last year. A lot of it was me being tied to the idea that I didn’t just want to make an announcement. I wanted to show that I’m still having fun skateboarding. I wanted to have a video announcement. Then Covid happened and then Thiebaud was just like, “That’s on you man. That’s your hang up.” [laughs] And then I had to acknowledge, like, “Yep, that’s me. All pride, man. All pride [laughs].” And so Covid helped me change the mindset from having a big idea for an announcement with a capsule collection with the boards, a music component, all with a video to being open to the idea that it didn’t need to roll out that way. It could just come out in small little chunks. Another thing that made it take some time was getting the board shape right, working on graphics with Mark, and then just all the board shortages and delays in the board manufacturing world. All of those factors just pushed all those plans so far out. Then Bram just hit me up saying, “Hey, we’re just going to put out your first ad.” So, the ad became the announcement, basically.

Talk about that spot in your ad. That’s one of those amazing spots that’s been skate stopped forever.
Yeah, I’m very grateful to get a trick there. That’s a spot that I’ve always dreamed of skating because I spent eleven years in the Inland Empire where that spot is, but it was never skateable. It’s this perfect fountain spot we always dreamed of skating because we’d hear the stories of Gonz and Neil and those guys skating that spot back in the day before the fence went around it. 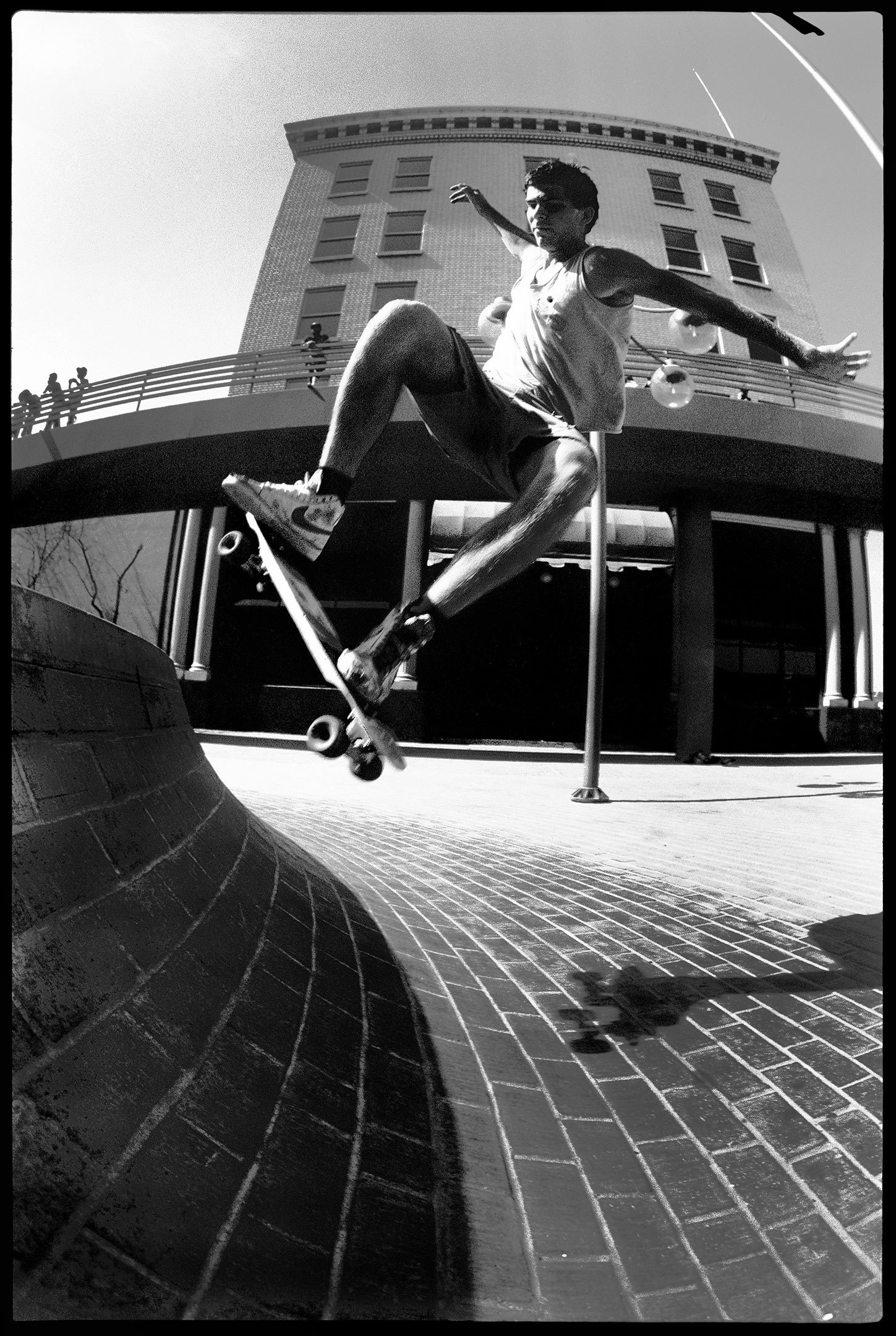 How long has that rail been around that spot? Decades, right?
Dude, that rail has been around that thing since ’88 or ’89. But then this year, Anthony Acosta tagged me in an Instagram post with dudes skating it with just a small amount of the rail cut out. I was so excited about skating it that we went that same day or the next. So, by the time we got there, even more of the rail was cut out! Man, it was so rad to skate that thing finally!

Yeah, I was digging how timeless the ad was—the trick, the spot, the angle, the bold graphic.
Yeah, it’s interesting that you say that. With Anthony capturing the peak of the Ollie, it reminded me of photos that O would take at mini ramps in the late ‘80s. It really gave me that feel of that time and era.

Do you know what your first graphic will be? Your guest board already had the ragdoll interpretation on it.
Yeah, Mark drew something completely new for it. You’ll see.

When was the first time you met Gonz?
Oh man, my first exposure to Mark was before I actually met him [laughs]. Experiencing in real life his monstrous talent was in San Jose. I was about 14 and we were at a local street contest. After the contest, Mark and Jeff Kendall showed up. This was the jump ramp era. I was blown away by their ability to shred! They were so good. They just started doing 360 airs off the jump ramp. Our jaws were on the ground. We couldn’t believe it. Just the power and how far they were doing it. That was my first exposure at seeing street pros in action. I’d seen vert pros before, but that was something else. I don’t even think I was sponsored at that point. But some time later, maybe 1987, I moved to Tustin, California. This was during the big NorCal / SoCal rivalry era too. When my parents said we were moving down South it was like a death sentence just because I was a NorCal dude, you know [laughs]. All my friends were mourning it, but what it did was put me in the backyard of my peers. I was able to skate with Ron Chatman, Jeremy Klein, Ed Templeton, Jason Lee. I remember skating in Huntington Beach at a place called Pay & Play and everyone would go skate there. And I remember, guess who shows up? Mark Gonzales. Maybe even Natas. I was like, “Whoaaa!” I was so excited because these were all dudes that I would only really see at contests in some distant place, and now we were all skating together at a local spot. All of those sessions were the same line up as any contest happening those days. So, I was around Mark a lot during that time. When I think of the role that he plays in skating and my skating, I always go with the analogy with Jazz. I see a lot of parallels with the Jazz greats. Miles Davis was always good about understanding and having his finger on the pulse of creativity and progression knowing that he had to always forge relationship with the new rippers and keep himself surrounded by them. “Who’s the new cat? Coletrain. Come play with me.” And I saw that with Mark. It was such an honor to be one of those dudes that he would reach out to like, “Come skate. Let’s skate.” That was my hero, you know. It’s the same with the Krooked guest boards, it’s the validation. It’s like the saying, “Praise from the praise-worthy is above all of the rewards.” 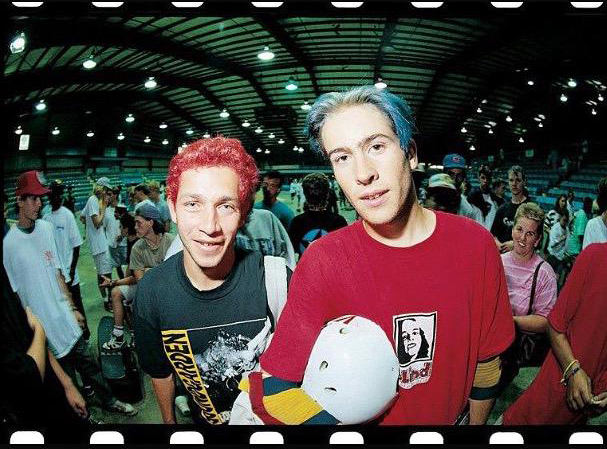 Would you have ridden for Blind if Gonz asked back in the day?
I’ll never forgot. Lance and I flew into Chicago for a contest and while we were checking into our hotel, there was a lot of buzz from other skaters there about Mark and Jason starting a new company. And so, we’re walking to the elevator and there’s Jason with his blue hair and Mark with his red hair and I asked them about what I was hearing in the lobby, “Are you guys going to start a new company?” And he said, “Yeah, it’s going to be called Blind.” I was just like, “Dude! That is dope!” It just sounded so cool to me. But just knowing it was going to be through World Industries and everything that they were doing at the time, I would have been hesitant to go. But in all honesty though, if Jason and Mark had asked me, I would have struggled for sure!

Thanks Ray and congrats! And happy belated birthday!