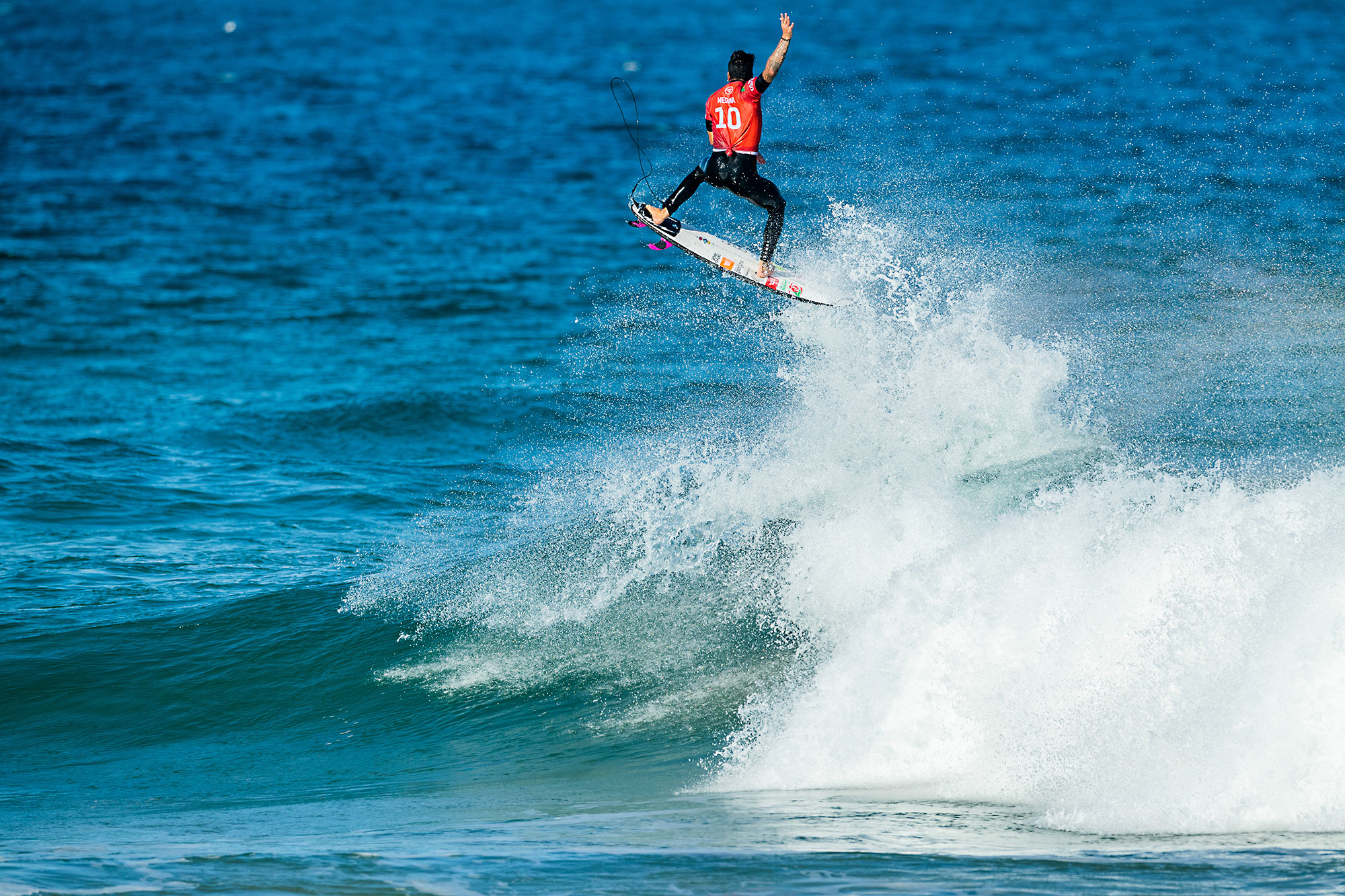 Over the weekend, the WSL ran back-to-back heats at the Rip Curl Narrabean Classic. The waves on tap were far from thrilling, but the top names still put on their game faces to make the showdowns exciting. In a repeat head-to-head from the previous event, ‘CT rookie Morgan Cibilic knocked out John John Florence, once again marking a major upset for the young giant slayer. Tyler Wright fell to Johanne Defay, and Medina landed an air that was about as crazy as his claim (hit the 3:30 mark above).

For more info on yesterday’s action, keep reading the WSL’s breakdown below:

Johanne Defay (FRA) continues to impress on the Australian leg of the 2021 CT, and today it came at the expense of two-time WSL Champion Tyler Wright (AUS). Following her impressive 16.66 combined score (out of a possible 20) yesterday, Defay out-surfed Wright with an excellent 8.00 (out of a possible 10) and a 5.83 to Wright’s 6.67 and 6.30. A former winner at Fiji’s Cloud Break, today Defay reminded the surfing world that she is one of the best backside surfers on the CT.

“This feels so good and I had a little cry out the back,” Defay said. “It’s insane how much pressure I was feeling in that heat. A few times she went on the first wave and the second one was better, which was so good and the fact I was able to perform well on them just felt so good for me. I’m so, so stoked.”

Wright now exits in equal 9th place, matching her results at Newcastle last week. After starting the season with a win, the eliminations are not ideal for Wright’s World Title campaign on the road to the Rip Curl WSL Finals.

In one of the closing heats of the day, the high drama hit a crescendo with the elimination of reigning WSL Champion Italo Ferreira (BRA) by Californian Conner Coffin (USA) in a matchup of two of the most contrasting approaches on the CT. As expected, Ferreira kept busy, finding lefts and rights, taking to the air in both directions, but Coffin’s patience paid off as he clinched victory on the last ride of the heat to book himself a second Quarterfinal spot this season.

“I had no idea what score I needed at the end of that heat but I knew I needed something,” Coffin said. “Coming up against Italo I knew I’d have to be on the best waves so I tried to stay patient and take the sets. I saw him flying around in the air and could hear the crowd going crazy and had to just compose myself and stick to my guns and luckily I did.”

With Wright now out of the event, Carissa Moore (HAW) and Stephanie Gilmore (AUS) are the only two World Champions left in the women’s draw. Moore, the current World No. 1 and reigning World Champion, eliminated Brisa Hennessy (CRI) with a 12.66 two-wave total in Heat 1 of the Round of 16. In Heat 7, Gilmore took down Sage Erickson (USA) with an epic display of fins-free surfing and will now face Courtney Conlogue (USA) in the Quarterfinals.

Keely Andrew (AUS) will come up against Moore in the Quarterfinals after taking out Malia Manuel (HAW) in R16, Heat 2. Andrew continues to prove she is a threat on this Australian leg and will look to improve upon her 3rd place result here in Narrabeen.

“I’m feeling good and am really proud of how I’m putting my heats together,” Andrew said. “It feels so good to be getting some results and I’m really looking forward to the rest of the year. My coach Andy (King) noted before the heat that it was slow out there so not to bother waiting and to take what you can get. I’ve always found I have to prove myself on my backhand, so moving forward I really want to post an excellent score going left.”

Australia’s CT future on the men’s side looks to be in safe hands as Australian youngsters Morgan Cibilic and Ethan Ewing booked spots in the Quarterfinals at the Rip Curl Narrabeen Classic.

CT rookie Cibilic continued to upset the CT, taking down two-time WSL Champion John John Florence (HAW) for the second time in as many events. After overcoming Florence in the Round of 32 at Newcastle, Cibilic proved his performance wasn’t a flash in the pan, dominating the heat with a phenomenal display of backside, fins-free surfing. Cibilic will move into the Quarterfinals where he will meet another two-time Champion Gabriel Medina (BRA), while Florence will head to his happy hunting ground of West Aus, still searching for a decent result in this Australian leg.

“It was nice to get some waves that stood up for me as my last few heats weren’t that great,” said Cibilic. “It feels good to know I could back up my result at Newcastle. I know I have it in me, but it definitely feels good to have two wins over someone like him. I know he’s so good in big waves so I’d love to match up with him in West Aus and see if I can go again.”

Ewing took down veteran Jadson Andre (BRA) to guarantee his best ever CT result with a spot in the Quarterfinals where he will do battle with Frederico Morais (PRT).